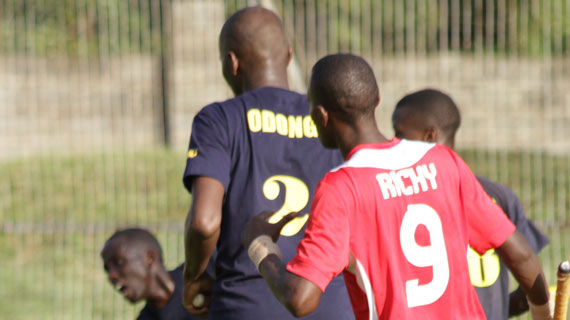 United States International University Hockey team  defender Dennis Odongo has passed on . Odongo was found dead in his apartment in Roy Sambu on Sunday night just hours after helping his team qualify for the quarter finals of the Nairobi Hockey League last weekend.

According to his team mates who were shocked by the news of his demise, Odongo was in good health and did not show any signs of illness, playing his heart out during the tournament.

" He had the best match last weekend and he did not show any signs of being sick. We were all shocked by the news of his death." Says Richard Wagema a member of his team.

The Kenya Hockey fraternity received the news of Odongo's death  at the City Park on Monday with shock and grief as the shocking announcement was made through a Public address system leaving many awe struck at the Park just moments before the final match  between Telkom Orange and Strathmore University.

His body lies at the Chiromo mortuary in Nairobi where it is expected to undergo a post moterm to ascertain the cause of his death.

The michezoafrika team sends our condolences to the family, friends and team mates  of the late Dennis Odongo.