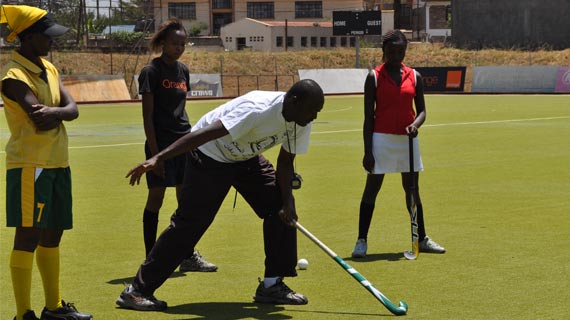 Openda in a training session

Telkom Orange ladies hockey team Coach Jos Openda has outlined that for the country’s hockey standards to improve, there must be more international exposure through international tournaments. Speaking to Michezoafrika.com, Openda who has seen the team through numerous domestic titles and most recently being crowned African Champions says that the standards will never improve as long as the country hides in its own cocoon and refuses to interact with other developed countries.

He says he has sent out a proposal to their official sponsors Orange to organize and international hockey tournament in the country.

The idea, according to Openda  was motivated by the fact that most of the local players lack international exposure and therefore perform poorly whenever called upon on the international stage.

“At the moment the project is just but a proposal and we are optimistically awaiting feedback from the bosses. We have clearly outlined the reasons why our players need the outside experience.” Openda told Michezoafrika.com.

“In our proposal, we have outlined to invite both ladies and men’s teams not just from the continent but also from other continents. It will be a great opportunity for the local players to interact and play with players from developed countries whose standards are way ahead of ours.” Adds Openda.

The tactician has also urged the Kenya Hockey Union to arrange the fixtures in such a way that such exposure tournaments are slotted in to avoid collision with the local leagues.

“There is the world league currently going on in selected nations. There is need to try and bridge the gap and improve hockey in the country. We are usually revolving mainly around the Olympic qualifiers and supplementing non-Olympic years with World Championships and continental championships for only two clubs. Having international events will benefit all teams equally.” He said.

The coach noted the importance of players taking part in as many matches as possible to remain fit and relevant to the game.

“It is never too much to play in as many matches as possible as long as players don’t pick injuries. Rest is important but there is no way it can beat the positive effect that international competition has on the development of hockey.” he added.

He notes exposure will be key prior to the nation hosting this year’s Africa Cup of Nations. African teams will use the continental championships to be staged at City Park stadium, Nairobi on September 26-October 6, as qualifiers for the World Cup in the Netherlands in June next year.