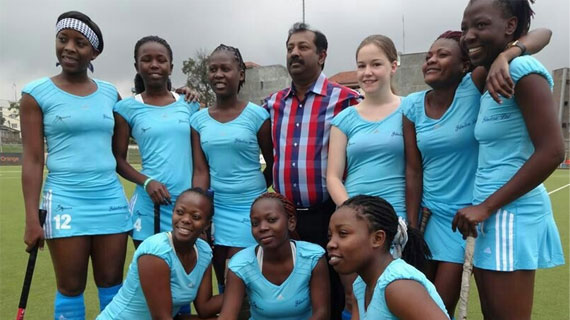 1999 Africa cup of club championships winners Sliders were on Sunday boosted  as they were presented with  a pair of uniforms  from Kalpesh Solanki who is the Director of Filmline limited company.

The Nairobi Simba coach who was recently elected Hockey Kenya Union assistant treasurer donated the set of uniforms to the club which is self sponsored in the league which was formed in 1991.

“Receiving uniforms is definitely a big boost to our self sponsored club. They also allowed us to use their grounds for training (Simba union grounds on forest road) and we hope it will be a long-term sponsorship.” offered Tina Agunda club secretary and player

The 2000 league champions are considered one of the most successful clubs in the league having played in the league since inception of ladies hockey in Kenya early in the 1990’s.

The club was formed by Dr Nyaki Adeya Weya, Vivien Agunda, Caren Ouma, Margaret Okore, Ryna Khadasia, the late Irene Njogu among others who together with the late Peter Gitau and victor Owino (coach) managed to organize a tour of France for the team back in 1995.

The club has been kept going by the spirit of the Agunda sisters who include, current KHU assistant secretary Vivien, Ndeda, Dorsillah, Anita, and Tina.

Dorsillah, Anita are active players while Tina who is also an umpire has only played a single match in the 2013 campaign. Anita was voted best player in the 2009 continental club championships in Nairobi.

They won continental crown in Zimbabwe in 1999, a year later in Egypt they won bronze , in 2007 in Kenya they finished fourth .Their last campaign was in 2009 in Nairobi where they narrowly lost 2-1 to reigning national champions Telkom Orange.

On the league level, Sliders have been second on most occasions many a times behind the unprecedented 15 times champions Orange.

“It becomes extremely difficult to favourably compete in the league which has become so competitive. You need good players and allowances to give the players. Nevertheless I wish to thank all those who have sacrificed to see the club move forward.” noted Tina.

Sliders finished third last season, they are currently second in the new season with nine points behind league leaders Orange with 15.