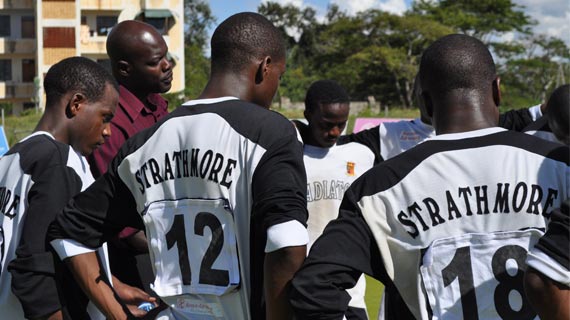 Strathmore University ‘Gladiators’ produced a sterling performance that saw them win the 2011 men’s  league title by drubbing Parkroad 5-0 on Sunday evening at the city park stadium.

The 2009 and 2010 men champions playing in their rearranged first game of the season showed intent and hanger for goals and points by fielding Meshack Senge who was in the Armed Forces side that is the last Kenyan men team to have won the continental diadem in 1998.

Gladiators synonymous in scoring from penalty corners came out with wholly diverse approach with their front men leading in all sorts of attack.

Benson Ochieng was on the target in the 9th minute chipping in an Allan Iningu short corner to get the Gladiators rolling.

They had to wait until the 31st and 33rd minutes for Emmanuel Simiyu all-field goals assault with a brace in quick succession to give his side a 3-0 win going to the break.

All their goals were very well calculated from field play, with their strikers easily running rings around the hosts’ defenders.But those were the only moments the champions had in the first half as Parkroad failed to make use of the couple of short corners they created in the second half.

Captain Iniungu got his name in the score sheet running the show all the way from midfield to beat the Parkroad custodian with a low shot with 10 minutes to the end. Seth Oburu scored with 8 minutes to the end to finish what had been a master class show for the former champions.

Gladiators in 2011 became the third team in KHU history to win the league two seasons in a row. The other teams are Ulinzi and reigning champions Nairobi Simba. Parkroad have played two matches won one and lost another.

Praising his charges, Gladiators coach Meshack Senge attributed the continued success by Gladiators as down to discipline, focus and team work.

“Once in a while when I feel in good energy I take it upon myself to help the lads play and get points. Being our first match we wanted all the points with a good goal count. We have settled the league on goal difference before. We don’t want to get into that position again.” He said.