Orange humiliate USIU at the Park 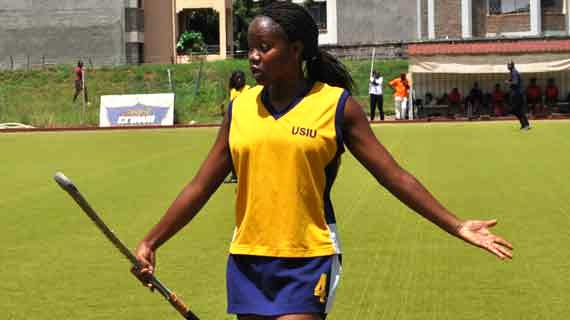 Orange humiliate USIU at the Park

Captain Betsy Omalla led from the front marauding from a defensive position to open the scoring for the African champions in the 28th minute.

“USIU had a very good first half. It was never an easy win because they fought to the last minute.” Betsy said while speaking after the match.

Midfielder Audrey Omaido was outstanding too, scoring a brace in the match first one coming six minutes to the end of the first half and the other with two minutes to the finish.

Margret Rotich scored in the 39th minute after another defensive lapse from the students.

Last year’s scoring machine Jackie Jow too was on the score sheet in the 42nd  minute hitting a powerful pass past Caroline Ngaracu in the opposing goal though the final ball had a deflection to pass as an own goal.

Terry Juma scored the fourth goal as her shot was deflected in the 51 minute for another own goal.

“We gifted them so many own goals from deflections. We also had a very shaky defensive play today and it did punish us.” Says USIU coach.

Captain Betsy then released Caroline Gucho to score the fifth goal in the 62nd minute .Omalla did her Trademark runs cutting through the midfield before feeding the midfielder with the easiest chance of the match.

Omaido scored her brace in the final three minutes to complete the onslaught.7-0 in the end.

Jos Openda, the Orange coach said what matters is how a team copes in the second half and not first half show.

"All teams play well in the first half. I have seen teams score over three goals in the first period and then going on lose the match. As Orange we are improving by day.” he said

This was the second match for the defending champions who opened their league campaign with a 3-1 win over Sliders last weekend.