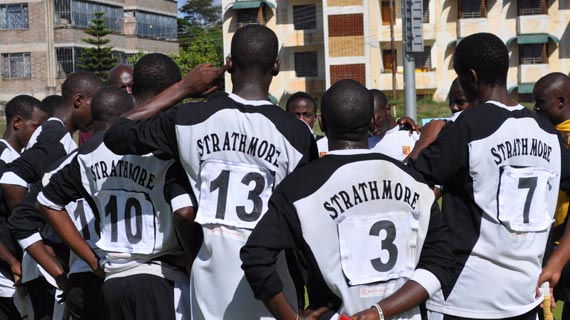 Kisumu Simba introduced themselves into the 2013 hockey season with a deserved 5-3 win over former champions Strathmore University in a league match played at the city park stadium on Saturday evening.

It was case of former employee coming back to haunt the employer for allowing them walk away easily .Midfielder Frank Wanangwe  and defender Kenneth Nyongesa were both facing their former team mates and they capped the reunion with incredible second half goals for the lake side outfit.

The match lived to its expectation with a trio of Wanangwe, Nyongesa and Maxwell Wakhungu pulling strings for their new club. On the other end, Coach Meshack Senge rallied his troops while welcoming back Brian Musasia who had been linked with a move to champions Nairobi Simba early in the year.

Wanangwe failed to open the scoring following a beautiful Zack   Aura’s through ball only for him to place wide after side stepping custodian Simon Odhiambo  in the fifth minute.

Gladiators got the first corner; Senge took it with midfield maestro and former captain Allan Iniungu failing to handle the ball from the corner. It was wasted.

Aura’s constant menace was rewarded when he connected nicely from a Dan Okinyo short corner, the experienced forward turning inside out one defender before burrying the shot to the lower bottom of the board.

The second half began with Iniungu having a midfield tussle with Dennis Owoko the Simba captain, the former was tasked with intercepting play for the Simba side .Strathmore main undoing was failing to disorganize  the lake side outfit.

Strathmore  pulled one back in the 42nd minute through a Benson Onchieng scrambled ball in the box.Collins Asimba should have done better prior to the goal failing to clear the loose ball.

Nixon Amadi scored the third with a low shot to an empty net after he was  set up by Wakhungu. The forth one was a cracker with Nyongesa hitting the ball hard from a short corner.

Later, Wanangwe was finally rewarded rounding the keeper to score in an empty net for the fifth.

Captain Hosea Walucho scored the second for Strathmore in the 68th minute with Seth Oburu scoring with the last kick of the match to give his side a meaningful score line.