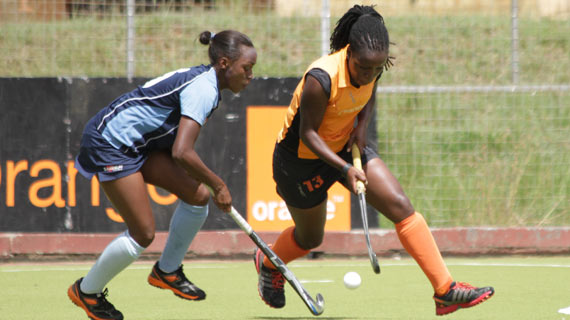 Kenyan International Barbara Simiyu has announced her retirement from the national hockey team. The Telkom Orange player who has cited job commitment for her retirement will however continue to feature for her club.

Barbara watched the recent World Hockey league matches played at the City Park in Nairobi from the terraces having excused herself from being part of the team.

In an interview with michezoafrika.com when reached for clarification, she said, “I have decided to retire from international assignments. This is a personal decision I have made as I take time off to concentrate on my job and club. I have also picked so many injuries  and I would like to just concentrate on club hockey where I can manage how I push myself.”

Barbara, a former student at Lugulu Girls High School in Bungoma joined Telkom Orange in 2011 after completing her studies at USIU. She first featured for the national side in 2007 and has been a regular player in the team since then making it a total of seven years as a Kenyan International.

She now says her club's focus is to retain the local league as well as target to defend the African crown later in the year “So far I have had a very exciting experience at Telkom and I look forward to better times ahead. We have our targets that include the Africa Club championships later in the year and we are working towards achieving every single goal we have set as a club including bagging the domestic league.” She adds.