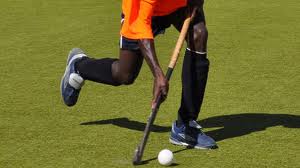 Homa Bay were handed a rude welcome to the hockey National League by Nakuru hockey club on Saturday though the team is happy with their first league match. Homa Bay conceded four goals and got a consolation goal later on in the early kick off match at the City Park stadium.

Just like all the 16 teams in the national men’s league Homa Bay have the desire to play and perhaps join top flight promotion.

Sheldon Mutsotso a player in the team narrated the team did play well considering aspects like inexperience and unfamiliar ground,

“Going by our inexperience we ran more in the first half and subsequently ran out of steam in the second half. The cork was moving much faster as opposed to the murram and grass pitches we are used to. It was a big challenge one that helped us going forward.” He explains.

The team also missed the services of a number of players who are yet to be released fully by their former clubs therefore making them ineligible to play .

“There are some procedures remaining before they can become our players. Some of them are coming from Kisumu Simba. By the next few games we should be having the full strength squad.” He added

Homa Bay did not however leave the city empty handed as they managed to bag three points accompanied by five goals as punishment to Kabarak University who failed to travel and honour their weekend fixture.

The self sponsored club is soliciting for funds the money that will be used to sign other quality players while also triggering release clauses to those whose deals have stalled due to lack of funds.