Hockey champions land cash boost ahead of kick off 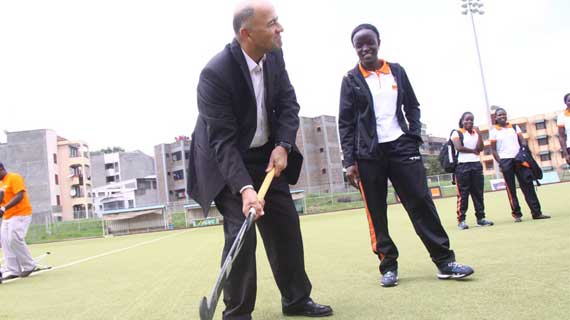 Hockey champions land cash boost ahead of kick off

Mickael Ghossein tries out new tricks during the l

Africa hockey champions Telkom Orange who are also 15 times local league winners today received a 7.4 Million shillings sponsorship boost when telecommunications services provider, Orange, announced renewal of their partnership ahead of the start of the 2013 season of the hockey league. The season will kick off on Saturday.

The sponsorship that was unveiled on Friday at the City Park stadium will cater for the team’s kit and equipment, players’ allowances and match facilitation.

While speaking during the brief ceremony on Friday, company Chief Executive Officer, Mickael Ghossein praised the team for its success at the continental level, clinching the African Cup of Club Championship trophy in Bulawayo, Zimbabwe last December.

He also commended the team coach, Jos Openda, for demonstrating leadership through his futuristic approach that has seen him attracts the country’s best talent.

Orange will open their 2013 title defense campaign against Sliders at 3.00pm on Sunday, May 11, 2013 at the City Park Hockey Stadium.