City turf comes under question ahead of African Cup 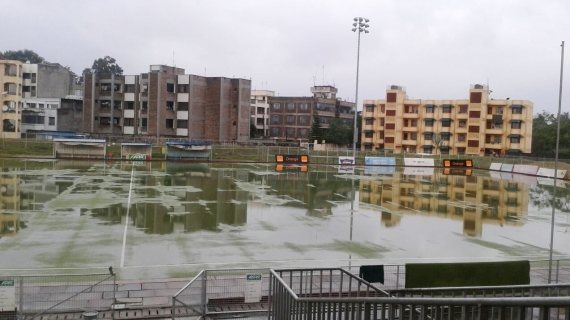 City turf comes under question ahead of African Cup

The waterlogged pitch after the weekend rains

Kenya Hockey Union officials have numerous reasons to worry ahead of the September Africa cup of Nations to be held in Nairobi at Kenya’s only standard hockey facility, the City Park Stadium. Over the weekend, the pitch’s soft underbelly was exposed as drainage problems were evident after the afternoon showers, forcing the postponment of the evening matches.

The Stadium was closed in 2003 for renovation after being over used and neglected, with then Sports Minister Maina Kamanda and KHU Chair Resham Bains overseeing the reconstruction of the pitch that saw an artificial turf being laid.

Located strategically in the heart of Nairobi the facility was built on countdown to the fourth All Africa Games held in Nairobi in 1987. Its edel grass turf was manufactured in the Netherlands with the latest technology in hockey pitches.

The turf’s drainage system has raised concern with several matches being postponed as it needs and average of six-seven hours to dry up.

The tough work that was incurred to bring the biggest extravaganza into the country might be in futility if the KHU does not move fast to upgrade the turf.

Another area of great concern is the parking which becomes  muddy and waterlogged when it rains as garbage from the neighboring hawkers market spill over to the stadium leaving the area literally impassable.

The floodlights in the stadium are meant to facilitate playing of more matches in the turf. The stadium can host a maximum of five matches per day and between seven and eight matches with the lights in place, but with the rains and poor drainage, this can not be entirely achieved.