Cheplait scores twice as Police shoot to the top 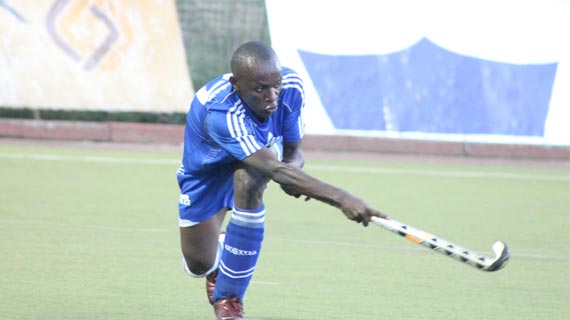 Cheplait scores twice as Police shoot to the top

Inspirational forward Moses Cheplait hit the back of the board twice as Kenya Police defeated Western Jaguars 3-0 to assume leadership in the men premier league in an entertaining match played on Sunday.

Samuel Wokila opened the scores with barely 10 minutes to the clock before last season’s top scorer Cheplait hit the second and third goals to take the law enforcers to six points from two matches.

Western Jaguar’s Hope Kutwa was the busier of the keepers having to keep away a series of fierce attacks from the Police side.

Cheplait found himself unmarked in the fifth minute, controlling a James Munyi cut from the right, and unleashing his trademark power shot only for the keeper to make a clever save. However, Kutwa was not as lucky just two minutes later, Cheplait releasing Wokila to sound the board for the first goal.

Michael Toritich had a rare chance for Jaguars who have not won a match in the last three years, but he could not make much of the opportunity as his weak shot was a mockery to the prowess of former Kenya One James Kayeko.

Police doubled their lead ten minutes after opening the scores, Cheplait finally getting his mark with a clean finish from close range. Seven minutes to the interval, Cheplait completed his brace with his powerful shot battling attempts from the Jaguar defense before finding its way in.

The second half was a rather dull and one sided affair as the Kakamega side was no threat to the 2011 champions. Police despite their unwavering series of attacks failed to add another goal in the match.

Police Team Manager Tom Odeng was not happy with the score line in the one sided encounter as he thought his side was not as lethal and should have banged in more goals.

“I am not happy with the number of goals we scored today. I mean you can’t dominate the whole match and only score three. My forwards were a bit sluggish in their execution.” He said.