Baptism of fire as MKU land 21-0 hiding in debut 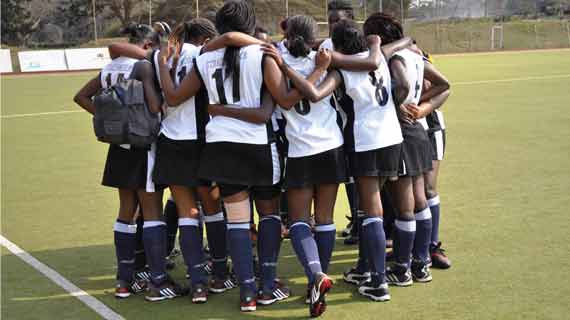 Baptism of fire as MKU land 21-0 hiding in debut

New comers Mt Kenya University were expecting a better welcoming party to the Women’s national league on Sunday when they faced continental representatives Strathmore University however that was never to be the case.

Forward Miriam Oundo who netted six times put last season runners up on the rampage as early as the 2nd minute. The goal was one of the two goals she netted in first half .The other four coming in the second half. She scored in the 37th and 44th, 45th and 54th minutes.

Nancy Wanjue also had six goals to her name coming in the 3rd minute, going to the interval Wanjue had netted five, coming in the 8th ,10th 13th  and 22nd  Her  second half goal came in the 49th minute.

Three players netted a brace each including Lucy Wanjiku in the 51st  minute and the other coming two minutes to the end. Nerica Kuguru scored a quick double in a space of two minutes in the 57th and a minute later. Regina Mwangi also scored a double with 10 minutes to the clock. Captain Laura Gichau and Yvonne Wanjiku scored one each.

Assistant captain Angie Mayaka attributed the win to their hard work as opposed to poor opponents as many would wish to think,

“We played well as a team with a maximum of three passes from my teammates. Once we started scoring goals kept on coming. It was a great show from the team.”

The midfielder said the main priority is to topple Orange from the helm of the league and become the champions.

“It might be too early to talk about winning the league however we have to start plans early enough. The idea is to keep winning all our matches and the dream will come real.” She noted.