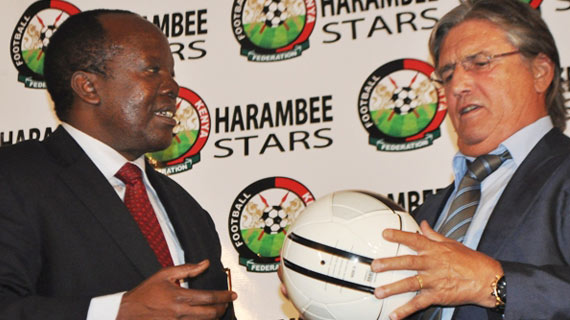 Football Kenya Federation has announced that they are searching for a new head coach to take over Harambee Stars after the departure of Frenchman Henri Michel who had been appointed three months ago.

The team is currently being handled by former Rangers FC head coach James Nandwa who was also in charge of the Kenyan team that took part in the CECAFA tournament finishing second behind Uganda Cranes.

This comes just days after Kenya dropped out of the CHAN qualification in the preliminary round following their 1-0 aggregate loss to Burundi last weekend.

According to statement by the Federation signed, FKF says they are concerned about the lack of strikers saying they are working hard towards addressing the matter urgently.FKF also says they were disappointed by coach Michel’s attitude especially in looking down upon local tournaments. Michel described the CECAFA tournament as useless in a previous interview and refused to take his team to Uganda appointing Nandwa instead.

FKF says it is in the process of identifying a professional coach to take over the management of the national team technical bench but acting coach James Nandwa will remain as the team’s assistant coach even after the federation identifies the new coach.

“We are happy with his performance so far especially during the East and Central Africa Senior Challenge Cup where we reached the finals for the first time in five years. We Want a Coach who will be ready to work with the team without looking down on some tournaments as it happened with Henri Michel. As a federation we were Very disappointed by the attitude of Michel.”

“We share the feeling with Kenyans because as a federation, we committed all our efforts to ensure the team performed to expectations, but unfortunately we all left the stadium disappointed.”

“However, this is not the time to lay the blame on the players, the technical bench or anybody else, this is the time to critically look at the reasons why we failed and come up with long term solutions that will see Kenya become a superpower in African soccer.” The statement adds.

FKF now says they will hold a consultative meeting with top stakeholders to identify long lasting solutions to the problems affecting Kenyan soccer.

“From the game, it was evident one of the weakest departments was the striking. Our Country lacks quality strikers right from the Club level. We are planning a Consultative meeting with the KPL and Division one Coaches to see how We can strengthen this department so that we can build strikers for the national teams.”