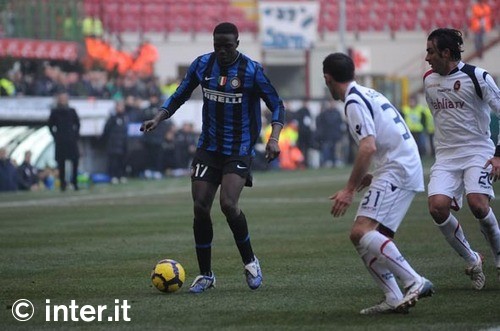 Under the charismatic leadership of Coach Jose Mourihno (FIFA Coach of the year 2010) Inter won the Champions League, The Serie A and Italian Cup. Inter has also been nominated for  Team of the Year Award at the Laureus World Sports Awards 2011, which are to be announced in Abu Dhabi from 5 to 7 February.

Oliech’s AJ Auxerre (140 points) is ranked at position 77, a good achievement considering that Auxerre is the 192nd largest city in France.

Since 2006 the IFFHS has awarded world's most popular football player based on online user votes. Liverpool captain Steven Gerrard was the first recipient while Al-Ahly’s and Egypt’s international Mohamed Aboutrika winning it in 2007 and 2008. Persian Karim Bagheri who plays in the Iran Pro League is the 2010 winner.

According to Wikipedia, IFFHS  was founded on 27 March 1984 at Leipzig (Germany) by Dr. Alfredo Pöge with the blessings of general secretary of the world football governing body at the time, Dr. Helmut Käser. The ranking system takes into consideration the results of twelve months of continental and intercontinental competitions, national league matches (including play-offs) and the most important national cup (excluding points won before the round of 16).

The IFFHS ranking however faces criticism with a German news agency Deutsche Presse-Agentur abstaining from publishing its rankings. The significance of IFFHS rankings and election has also remained a debatable topic across media channels.