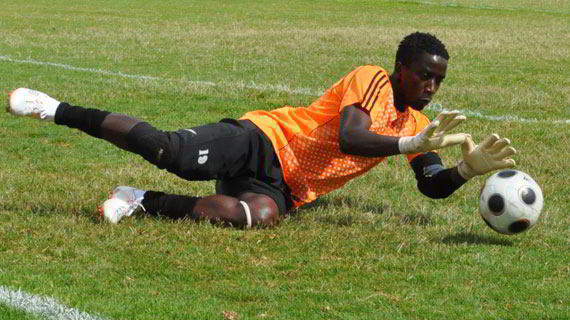 Kenya’s number one keeper Arnold Origi Otieno left Nairobi on Wednesday morning for his Norway base to link up with his new club in Norway -Fredrikstad. Origi has joined the club on loan from FK Moss. Fredrikstad features in the Eliteserien (The highest League in Norway) and is one of the most successful clubs after nine league titles and eleven cup wins.

Origi,who turned 28 on Tuesday, has been in top form for the national team-Harambee Stars-and was highly credited for denying Uganda a chance to participate in next year’s Africa Cup of Nations with his heroic saves .On Tuesday, Origi had an easy assignment as he was troubled by the Seychelles strikers only once.

Fredrikstad was founded in 1903 and reached the third round of Europa Cup last season (2009-2010) but has had a bad season as they are placed 13th in the 16-team table with two matches remaining.

The club had to seek permission from the Norway football Federation to secure Origi’s services outside the transfer window following the many injuries to keepers Lasse Staw , Bjørn Erik Kristiansen and Milos Crnogorac.

"We are very pleased to have Arnold for the remainder of the season. Arnold has international experience. He has impressed in training and we are very confident that he will be great for us" said Joacim Jonsson.

The talented keeper is expected in Nairobi later in December for his holiday and will not be available for the forthcoming CECAFA tournament. His place will be taken up by Ulinzi Stars’ keeper Jacktone Odhiambo who has been recalled back to the team to join Sofapaka’s Duncan Ochieng.

Many Kenyan fans will be happy with the new development as they are of the opinion that it is high time Origi played in a higher level  in Europe as he is among the best goalkeepers in Africa currently enjoying great form.