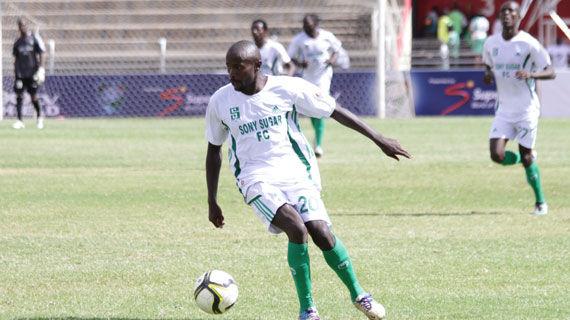 Former Thika United target man Moses Arita will jet off on Tuesday morning for Albania where he is expected to join his new club KF Tirana on a three year contract.Arita, the current KPL top scorer with ten goals signed a three year deal to join one of the most successful Albanian club KF Tirana on loan from Thika United and he departs hopeful of a bright future ahead.

‘”This is a big step and boost for my career and I thank God for the opportunity. Am ready for the new challenge ahead because am getting into a new culture where I have to learn new language and traditions.” He said.

Arita has already acquired his work permit and is ready to start his professional career on a foreign land. “The ball is now in my court as I have to work extra hard to maintain or even double my performance to keep up with the stiff competition in the European leagues. This is a dream come true for me and I will do everything possible to guard it by performing well and flying the national flag high.” He added.

At Tirana, Arita will join countryman James Situma who has already settled in the team and acquired himself a regular starting position in the team’s starting line up.

FACTS ABOUT MOSES ARITA
Arita was born and brought up in Nakuru in a family of four. He went to Mama Ngina primary school in Nakuru then joined Manor high school in Rift Valley where he sat for his Kenya Certificate of Secondary Education (KCSE) exams.

After high school he joined nationwide team St. Andrews Turi in Molo in 2008 before being poached by premier league side Sony Sugar in 2009.

After one season at Sony, Arita joined Thika United in 2010 where he was a frequent player in the starting line up but it was not until the 2011 season that he burst out into the limelight with his goal poaching skills that saw him score in almost each match to become the top scorer in the top league with ten goals by the time he signed his new deal to join Tirana.