Winning start for Kenya in U-20 Handball championships 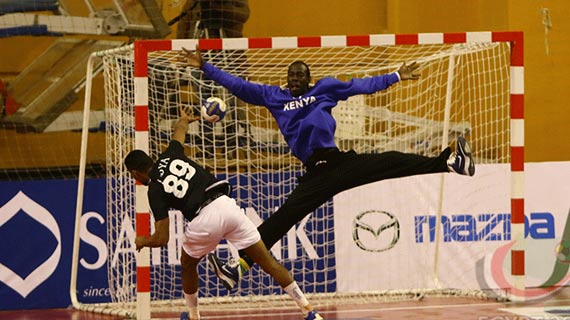 Winning start for Kenya in U-20 Handball championships

After a closely contested match between hosts Kenya and Burundi during in the East and central U-20 championships on Sunday evening, Kenya emerged winners  with a  34-30 score line. This was Kenya’s first  match in the U-20 Handball championships  currently ongoing at the Kasarani Sports Complex.

So intense was the match that both teams were at a draw level of 16-16 by half time. In the second half the hosts Kenya were 4 goals down with ten minutes to the final whistle. But the home lads pulled a great comeback to level the scores l at 28 – 28 with 5 minutes to go.

The hosts were able to keep the pressure on the visitors and in the dying moments of the game John Wante scored two goals while Martin Nguli and Joseph Mwangi each scored one goal to finish off the Burundians. The game ended 34 – 30 in favor of Kenya.

Speaking to Michezoafrika.com  after the match, head coach Allan Mate said that the game was tough his boys gave their all; ‘’The game was hard but the boys were determined to win in the first match so that was motivation enough to see us through’’.

Kenyan winger Joseph Mwangi also underscored the importance of winning the opening game especially due to the fact that the opponents were equally good.  “Burundi has shown to be a strong team but the win was most important. I am glad that we pulled it through,” he said.

The Kenya women’s team will play their first game at 4.00 pm on Monday against Rwanda while the men’s second game will be at 6.00 pm also against Rwanda.