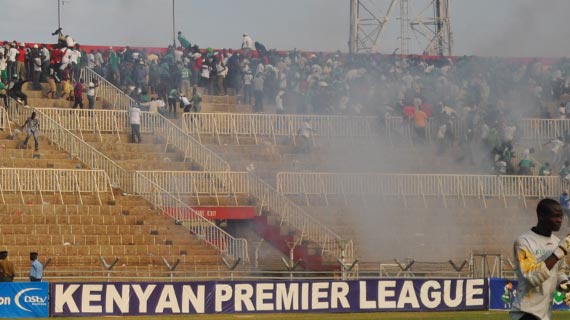 Following last week’s skirmishes after the derby on Sunday pitting Gor Mahia FC and AFC Leopards, it is now emerging that the Kenya Sports Stadia Management Board (SSMB) has ruled they will not host Gor Mahia at their venues – Nyayo national stadium and Moi International Sports Center Kasarani for a period of not less than one year starting immediately.

According to the ruling delivered by the chairman retired General Daniel Opande on Friday morning in a press briefing , any game/match or event involving Gor Mahia whether home or away will not be granted access to any of the Stadia managed by the Sports Stadia Management Board.This will last until such a time when the board shall be convinced that the trend has changed.

These include Nyayo National stadium and Moi International Sports Center Kasarani that is due to be re opened after two years of closure for multi Million shillings renovations.

Gor Mahia FC has also been instructed to pay for all the damages caused at Nyayo during the scuffle that left a number of fans from both divides injured and property of unknown value damaged extensively.