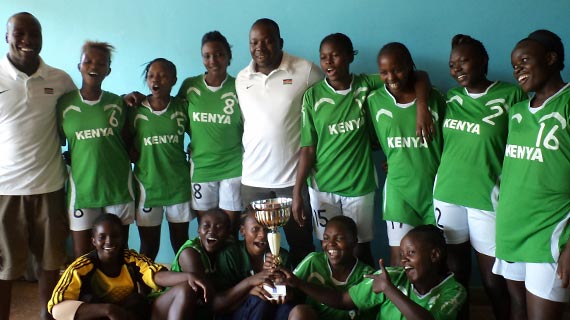 The Kenya under 20 ladies handball team whitewashed Tanzania 30 – 10 in a one sided match played on Thursday afternoon at the Moi International Sports Complex –Kasarani to win the East and Central Africa Zone 5 B championship.

The Kenyan team headed into the match with 6 points from their previous matches while their East African counterparts had no point at all since they had not won a single game in the tournament. The Kenyan goalkeeper Phoebe Akinyi had an easy time at the posts with the Tanzanians posing no threat at goal.

This means that the Kenyan team will head to Cote d’ Ivoire for the U-20 world cup qualifying matches in May.

Speaking to Michezoafrika.com the head coach Fareed Mohammed said that they deserved to win, ‘’ we had prepared well enough and the girls deserve the win’’.

Earlier in the day Rwanda ladies team beat Burundi 31 – 18. Uganda was in the second position with 6 points since Kenya garnered 8 points after the win over Tanzania in the games that were played in the round robin format.