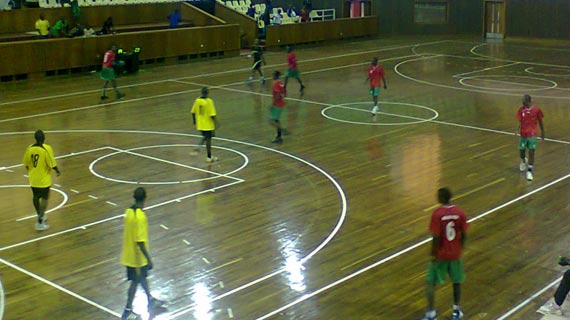 Kenya U- 20 men’s handball team on Wednesday night suffered a shocking defeat to Tanzania going down 26 – 29 in a tension filled match at the ongoing East and Central Africa Championships at Kasarani in Nairobi.

What seemed like an easy match for the home side, the many fans who had turned out to cheer the boys only left disappointed after the final whistle. A section of the fans could be heard blaming poor decision making by the technical bench.

The Tanzanians were a rejuvenated side compared to the one that was beaten by Rwanda on Tuesday evening opening up the Kenyan defence at will. The technical superiority was evident with the Kenyans being pushed to the extent of making simple errors that eventually allowed easy points for the victors.

Speaking on behalf of the Kenyan technical bench coach Fareed Mohammed conceded defeat, ‘’ they were simply the better team today’’.

The tournament which was played in a round robin format sees Kenya having 3 points after one win, a draw against Rwanda plus Wednesday’s loss to Tanzania.

Kenya plays Uganda on Thursday the final day of the tournament and they need to beat them with a margin of 13 goals in order to have a chance of winning the tournament since Burundi beat the Ugandans 32 – 23 and the Burundians lost to their neighbours Rwanda 31 – 36 in the last match on Wednesday.

The tournament will end on Thursday evening and will see Kenya ladies team play Tanzania in their final match.