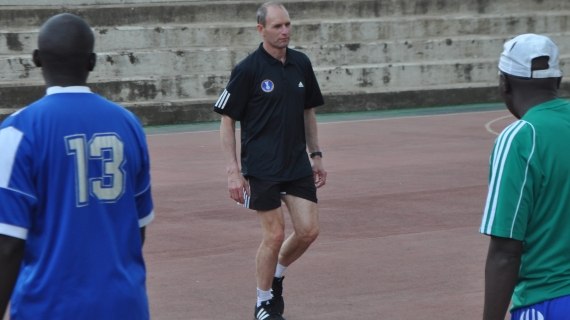 Zoltan Marczinka during one of the sessions

Hungarian handball coaching instructor Zoltan  Marczinka has praised the standards of the sport in the country.Marczinka who is in Kenya for the Olympic Solidarity Advanced Coaching course stated that what he has witnessed so far has impressed him. The coaching course started on the 3rd of May and will end on the 12th of the same month

“I am pleased by what I have seen since I came. The levels of expertise I have witnessed from the coaches whom I am instructing are up to the expectations.” He said.

Marczinka also praised the players that he has been able to observe pointing that they have the potential of progressing further, “the few teams that I have seen play, I have been able to spot a few individuals especially the young players and I see great potential in them.”

On what the course entails, Marczinka explained that his main focus was on the technical and tactical aspect of handball, “we have two theory sessions and two practical sessions in a day that translates to around seven hours of intensive training where we look at conditioning , tendencies of handball among other things. All in all we are right on schedule.”

Marczinka is one of the top IHF coaching instructors in the world.