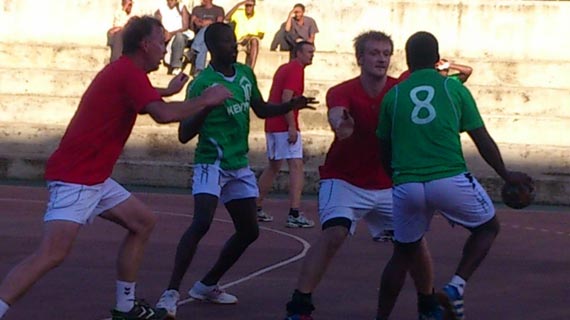 The Danish squad consisted mainly of former Denmark National team players with one of Europe’s top handball player Lasse Boesen being among the veteran stars. The team is in the country for the Peace and Sports Festival that was hosted earlier at the Nyayo Stadium. Boesen is also one of the founders of Street Handball a form of handball played mainly by kids and was established in Denmark.

In an entertaining encounter the visitors proved why they were once handball greats with impressive plays and easy goals against a much younger Kenyan side. The home boys tried their level best with hard shots at goal but Caleb Odima who had stepped in goal for the visitors since they had no goal keeper of their own kept them at bay. Odima was part of the U-20 squad that participated in the East and Central Junior Championship last year and also plays for Strathmore University in the Kenya Handball Federation League.

Speaking after the match Thodosia Sangoro who scored 4 goals for Kenya said Kenya still has a long way to go but with time will catch up, “despite being way older than us they knew what they were doing. In terms of skill, passing precision they were on top, but that was expected since they have played at the top most level of handball in the world for a number of years. With more exposure like the one we had today I am sure Kenya will improve.”

Jack Ochieng who coached the Kenyan side shared Songoro’s sentiments, “in terms of technical skills we were nowhere close to them they have immense experience in high level handball and that was evident in their play. As coaches we will strive to expose the boys to such matches so that they gain the necessary technical skills.”