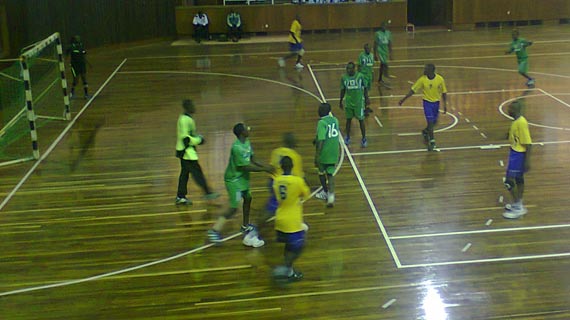 It was a close shave for the Kenyan men’s handball team during their second match of the day on Monday as they were forced to a 36-36 draw by Rwanda in the ongoing East and Central Africa Championships at Kasarani .

In the highly charged match, the visitors were leading Kenya 16 – 14 during half time, with Kenya exposing a leaking defense line.

Kenya’s Martin Nguli was a constant thorn in the flesh of the Rwandese team with a number of brilliant plays and goals that thrilled.

Speaking to michezoafrika.com after the match, man of the day Nguli admitted this was a tough match and acknowledged the technical play by their opponents.

‘’The Rwandese are very skillful and the match was very competitive since every time we scored they also did the same, there was no clear advantage throughout the match’’.

The team captain Jerry Ogallo saved Kenya  some blushes when he scored  a fast break in the last minute to level the scores  36 – 36 at the final whistle.

According to the Kenyan captain they did not perform as expected ‘’ we didn’t do our best according to our standards but we will improve.’’

The head coach Allan Mate partly blamed poor refereeing in the performance and but also pointed out weak spots in his defense line though he promised to seal off the loose ends before the next match.

"There were some decisions that the referee made that I think were not right.Our defence was also poor but we are working to improve on that’’.

The Rwandese captain Munyaneza Amandin also complained about poor officiating of the game  and called for improvement performance from the match officials ‘’
The standards of officiating is still wanting, otherwise it was a good game’’.He said

Kenya needs to win all its remaining games if they are to have a chance of clinching the title. They play Uganda on Tuesday evening from 8.00 pm.