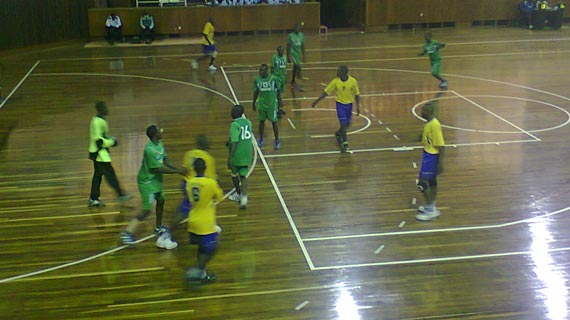 In a pulsating match played at Kasarani the under 20 men’s handball team beat Uganda 32 – 23 in the ongoing East and Central African Championships (Zone 5 B).

Burundi was the sharper side from onset with the systematic flow of their attacks at the Ugandan defence. The Ugandans continued to have a bad day as a number of their goals were denied since they constantly encroached the restricted D area.

The first half ended 14 -12 in favor of Burundi and the second period witnessed extensive attacks as the Ugandans became more frustrated when the Burundian attack simply became unstoppable and at some point there were only 4 Ugandan players on the court due to suspensions. Two of Uganda’s players also received red cards.

This was the fourth time the two teams are meeting and both have won two games each. The Burundian coach Emery Kirundo was pleased at his sides performance and said that they are more than ready for the next match ‘’ in our first game against Kenya my players were exhausted since we played the same day that we had travelled, but today you have seen what they can do. We are ready for our next opponents.’’

"I am happy that we have won this game and owe it to the preparedness that we undertook.’’