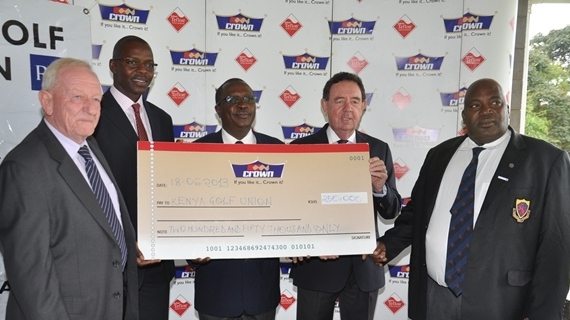 Golf is a precision club and ball sport in which competing players/golfers use many types of clubs to hit balls into a series of holes on a course using the fewest number of strokes. Golf is defined, in the rules of golf, as "playing a ball with a club from the teeing ground into the hole by a stroke or successive strokes in accordance with the Rules."

It is one of the few ball games that do not require a standardized playing area.

A golf course consists of a series of holes, each with a teeing ground that is set off by two markers showing the bounds of the legal tee area, fairway, rough and other hazards, and the putting green surrounded by the fringe with the pin (normally a flag stick) and cup.

The levels of grass are varied to increase difficulty, or to allow for putting in the case of the green. While many holes are designed with a direct line-of-sight from the teeing area to the green, some holes may bend either to the left or to the right. This is commonly called a "dogleg", in reference to a dog's knee. The hole is called a "dogleg left" if the hole angles leftwards and "dogleg right" if it bends right. Sometimes, a hole's direction may bend twice; this is called a "double dogleg”. A typical golf course consists of 18 holes, but nine-hole courses are common and can be played twice through for a full round of 18 holes.

Play of the game

Every round of golf is based on playing a number of holes in a given order. A "round" typically consists of 18 holes that are played in the order determined by the course layout. On a standard course of 18 holes, each hole is played once in the round; on a nine-hole course, players may play a "short game" playing each hole once, or a "full round" by playing each hole twice.

Playing a hole on a golf course is initiated by putting a ball into play by striking it with a club on the teeing ground. For this first shot on each hole, it is allowed but not required for the golfer to place the ball on the tee prior to striking it. A tee is a small peg which can be used to elevate the ball slightly above the ground up to a few centimeters high, which reduces the interference of the ground or grass on the movement of the club making the ball easier to hit, and also places the ball in the very center of the striking face of the club for better distance.

The game can be played either individually or in groups and sometimes accompanied by caddies, who carry and manage the players' equipment and who are allowed by the rules to give advice on the play of the course. A caddy's advice can only be given to the player or players for whom the caddy is working, and not to competing players.

Rules of the game

The underlying principle of the rules is fairness.

“Play the ball as it lies, play the course as you find it, and if you cannot do either, do what is fair.”

Golfers abide by a set of guidelines called golf etiquette. Etiquette guidelines cover matters such as safety, fairness, pace of play, and a player's obligation to contribute to the care of the course. Though there are no penalties for breach of etiquette rules, players generally follow the rules of golf etiquette in an effort to improve everyone's playing experience.

Golf clubs are used to hit the golf ball. Each club is composed of a shaft with a lance (or "grip") on the top end and a club head on the bottom. Long clubs, which have a lower amount of degreed loft, are those meant to propel the ball a comparatively longer distance, and short clubs a higher degree of loft and a comparatively shorter distance. Typically, the actual physical length of each club is longer or shorter, depending on the distance the club is intended to propel the ball.

Golf balls are spherical, usually white (although other colors are allowed), and minutely pock-marked by dimples that decrease aerodynamic drag by increasing air turbulence around the ball in motion, which delays "boundary layer" separation and reduces the drag-inducing "wake" behind the ball, thereby allowing the ball to fly farther.

A tee is allowed only for the first stroke on each hole, unless the player must hit a provisional tee shot or replay his or her first shot from the tee.

A golf bag is used to transport golf clubs and the player's other or personal equipment. Golf bags have several pockets designed for carrying equipment and supplies such as tees, balls, and gloves. Golf bags can be carried, pulled on a trolley or harnessed to a motorized golf cart during play