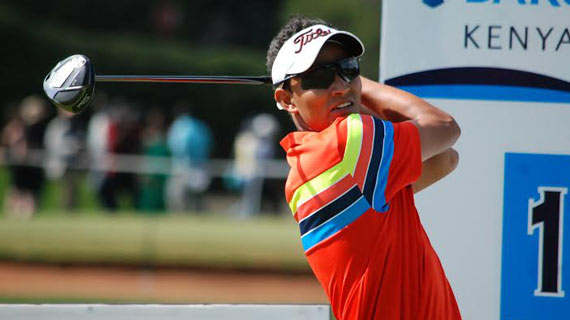 Kenyans Dismas Indiza and Greg Snow stayed in contention for the Barclays Kenya Open title, heading into the final round of play one shot and two shots off the pace, respectively after Saturday's third round. The two home hopes have been paired together for the final round as they aim to make it a first Kenyan winner in the event’s history, which is sure to make for an electric atmosphere.

Two Spaniards will be hoping to join their hero Seve Ballesteros on the prestigious list of winners at the Barclays Kenya Open, after Alvaro Velasco battled to maintain his lead on day three and was joined at the top by compatriot Pedro Oriol and South Africa’s Jake Roos.

If either Velasco or Oriol were to claim victory tomorrow, they would make it two Spanish wins in as many years after Jordi Garcia Pinto’s triumph at Karen Country Club last year, while European golf legend Ballesteros and fellow former Ryder Cup star Jose Maria Cañizares also won this tournament before it joined the Challenge Tour schedule.

Velasco has led the field since day one and, while he struggled to build on his impressive opening two rounds, he was delighted with the battle he showed as he fought back from two over par to card a level par 72 and remain on eight under.

“It was a tough day today,” said the 32 year old, a former Challenge Tour Number One with two wins under his belt. “I didn’t play very well but I put up a good fight out there and I feel like I have done a good job.

“I found it tough to make birdies and I had a couple of bad shots but I showed good fight and at the end I got the reward with a birdie at the last.

I'm not thinking ahead of myself for the final day. I try to stay in the present and in the now and not think about what would be. If things start to happen then I will begin to think about winning but not right now.”

Oriol, meanwhile, joined his fellow countryman at the top courtesy of a two under par 70, which included five birdies and three bogeys, and he is delighted to be in contention heading into the final round.

“It was the hardest day today,” said the 27 year old. “The wind was blowing hard and the course is getting firmer and firmer so I'm very happy with my round.

“Last year the crowds were amazing and this year there are Kenyan players up there so if you’re playing good, it’s great fun to have people watching.

“I know Seve won this tournament, and Jordi last year, so it would be great to win. To win a tournament Seve has won, that would be huge for me.”

Roos, an experienced South African who was in contention on The European Tour just last week at the Tshwane Open, is playing on an invite this week and he was delighted to have joined the leaders on moving day as he vies for a maiden Challenge Tour victory.

“It was very breezy again today so it was tricky but I played nicely,” said the 33 year old from Pretoria, who signed for a one under 71. “I'm a little disappointed with my finish but it’s still a round under par so I'm pleased.

“I was trying to kick on after moving to nine under but I missed a few putts and the greens are so firm, it’s a struggle to make them drop. But it’s the same for everyone so I have to stay patient and keep making good strokes and see what happens.”

The crowds are sure to be out in force for the final day as Snow leads the home hopes, just one shot off the pace alongside Oliver Bekker and Danie van Tonder of South Africa, Englishman Sam Hutsby, France’s Adrian Bernadet and Dane Lasse Jensen.

Indiza also commanded huge crowds on day three and they are sure to return as he sits two shots back on six under par.