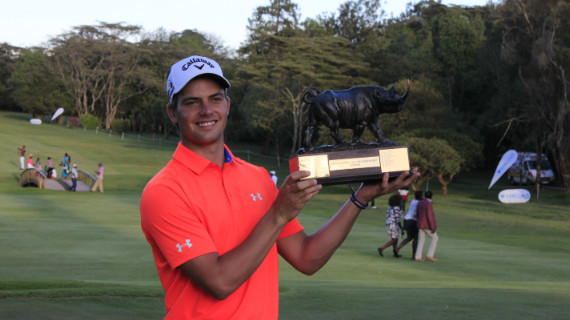 Haydn Porteous carded a dramatic eagle two at the first extra hole to edge out compatriot and friend Brandon Stone en route to his first professional title at the Barclays Kenya Open in Karen this afternoon.

The duo had tied at seventeen under at the close of the last round of play, prompting the playoff to determine the 2015 winner.

At the end of it all, the 20 year old South African showed nerves and composure way beyond his young years to absorb the pressure and attentions of the large crowd at Karen to claim the 2015 title.

Kenya's Dismas Indiza, on whom the nation's entire hopes were pegged on finished joint 28th after posting his worst score over the four rounds, the three over par 75 seeing him close the tourney with a five under 283.