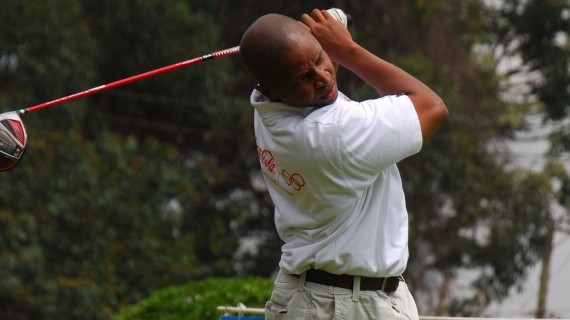 Handicap 19 L. Murage posted 40 points, steering his team to victory at the second last qualifying round of the 2012 Dasani Golf Gala played at the par 71 Muthaiga Golf Club over the weekend.

Murage's team emerged top with 109 points courtesy of contributions from handicap 26 player C. Njuguna who posted 35 points to the team and H. Kinyua, a handicap 24 player who amassed 34 points. J. Karuri was the team’s weakest link as they earned a slot to the Grand Finale slated for Saturday 29 September 2012 at the Karen Country Club.

Speaking on behalf of the team, Murage said, "The course was played great today and I would like to commend the greens-keeper and his team for keeping the course in such a good standard. We played well today, but plan to play better at the finale”.

Also booking a berth to Karen was the second placed quartet of J.Mugaa (37),C. Gikombi (33), J.Mutethia (36) who managed a combined score of 106 points. J. Iracha was the teams' weakest link on 28 points.

Speaking during the prize giving, Peter Njonjo the General Manager Coca Cola East Africa Franchise noted that the Muthaiga leg was the penultimate in this year’s series, with the last qualifying round slated for the Limuru Country Club next weekend.

He said, “We would like to thank you for the overwhelming participation with 171 golfers registered today. I would also like to commend the participation of the junior golfers who took the course today. Through the Gala, we are supporting Junior Golf development to the tune of Ksh 300,000. In addition, junior golfers participating in the gala this year are equally eligible for the grand prize. We believe this is one of the ways to nurture their interest in the sport,”

This year, the winning team at the grand finale Karen will be rewarded with a memorable golfing trip to Dubai in November to attend the Grand Finale of the European Tour, the DP World Tour Championship at the Jumeirah Golf Estates all courtesy of Dasani.

The 2012 DP World Tour Championship will feature the world's top sixty golfers compete in The Race to Dubai Grand Finale. The pick of the crop who include Rory McIlroy, Rose Justin, Molinari Francesco, Ernie Els, Luke Donald & Lee Westwood – all currently ranked amongst the world's top ten on the current Leader board will battle it out for the US$ 1.3 Million winner’s cheque.