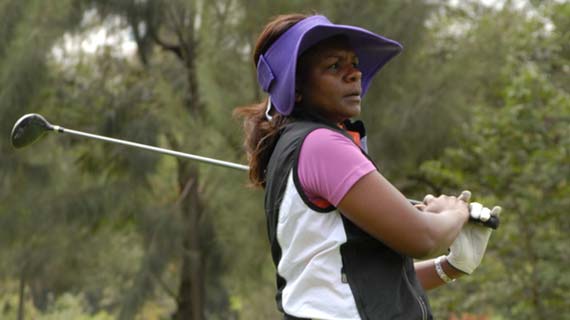 Home player James Mburu Muigai anchored his team to victory with a score of 110 points at the fifth round of the 2012 Dasani Golf Gala at the Railway Golf Club on Saturday 23 June 2012.

David Mbatia, playing off handicap four was the team’s weakest link on 30 points. They booked one of the two slots to the September 29 Grand Finale that were up for grabs from this qualifying round.

The day’s biggest cheer was however reserved for Nassir Abbas, a member of the Railway quartet that emerged victorious at the 2011 Grand Finale. Playing with a different trio this time round, Abbas carded 20 points in the opening nine and 18 in the second nine, posting an overall 38 points. His colleagues, handicap 26 D.

Kaburi posted 37 points, handicap 26 H. Hasanli contributed 31 points while G. S. Padam playing off handicap 12 was the team’s weakest link on 31 points. Their combined score of 109 points was good enough for second place as they claimed the final slot to the Grand Finale available from this round.

Samuel Ndonga playing off handicap 10 won the junior prize with a cumulative score of 36 points, posting 17 points on the first nine and 19 points on the outward nine.

Limuru’s Gakuo Macharia was the guest winner and Thinji Miano claimed the nearest to the pin prize.

The grand prize this year will see the winning team of four players travel to Dubai to attend the Grand Finale of the European Tour, the DP World Tour Championships at the Jumeirah Golf Estates. While in Dubai, they will also have the opportunity to see Europe’s top 60 money earners on the 2012 Order of Merit battle it out for a 1.3 million winner’s cheque.

Steve Maikweki, the Coca Cola Assistant Brand Manager who graced the prized giving ceremony said, “They will also earn the opportunity play some rounds of golf at some of the region’s best courses , including the Dubai Creek Course and the challenging Faldo Course at the Emirates Golf Club, a course designed by six time major champion and former world number 1 and six-time major Champion Sir Nick Faldo.

The Dasani Golf Gala heads down to Mombasa next weekend where eight more qualifiers shall emerge from the sixth qualifying round to be held at the Nyali Golf and Country
Club on Saturday 30 June 2012.