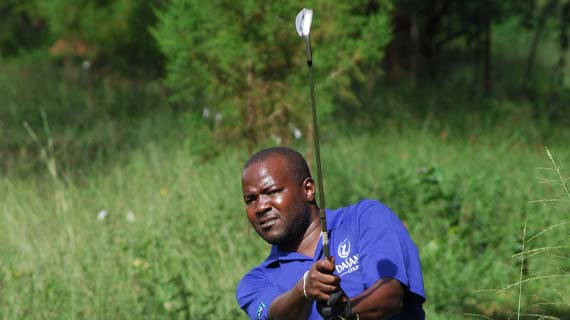 Playing on their home course, the Kiambu Golf Club team of Timothy Kihara,Eliud Kuria, Newton Mwangi and Thomas Kimari posted a joint score of 111 points to win the opening round of the 2012 Dasani Golf Gala at the par 72 Kiambu Golf Club on Saturday 26 May 2012, earning qualification to the Grand Finale slated for Saturday 29 September 2012 at the Karen Golf and Country Club.

Kihara began his round with consecutive pars on the first three holes, dropping a shot on the fourth hole, double bogeying on hole five and six, again bogeying on holes seven and eight before leveling the ninth hole for a first nine score of 21.

Kuria,speaking on behalf of his team said they deserved the win and promised a repeat performance at the Grand Finale as they seek to claim the ultimate prize, a golf tour to Dubai.

“We arranged the game yesterday, but we honestly didn’t know we would take the overall title today. All the four of us have, however, been playing good golf of late, in fact I won a tournament here last weekend and another one yesterday so it is not by accident that I am in the winning team, we hope to carry the same form to the grand finale,” said Kuria.

Speaking at the presentation ceremony, Steve Maikweki, Coca-Cola Assistant Brand Manager-Kenya said: “This year’s grand finale will see the winning team of four players travel to Dubai to attend the Grand Finale of the European Tour, the DP World Tour Championship at the Jumeirah Golf Estates. While in Dubai, they will have the opportunity to see Europe’s top 60 money earners on the 2012 Order of Merit battle it out for a Sh109, 200, 000 (1.3 million dollar) winner’s cheque.”

He added: “In addition, they will play to some of the best golf courses in the region, including the Dubai Creek Course and the challenging Faldo Course at the Emirates Golf Club, a course designed by former world number one and six-time Major Champion Sir Nick Faldo.”

Action continues on Saturday 2 June 2012 when the second round of the Dasani Golf.