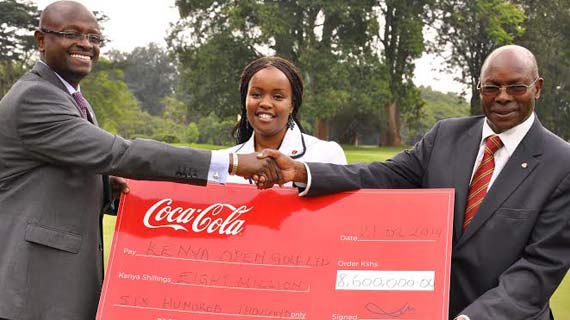 Coca-Cola has been the official water sponsor of the tournament for the past 4 years through its bottled water brand Dasani, has now come on board as a platinum sponsor through their Coke Brand.

Speaking at the ceremony, Kenya Open Golf Limited (KOGL) Chairman Peter Kanyago thanked Coca-Cola for their sponsorship, saying, “the association between the tournament and Coca-Cola has grown from strength to strength over the years. We are in particular grateful for your gesture which will go a long way in ensuring that the 2014 Barclays Kenya Open is a success.”

“Coca-Cola is the world’s largest beverage company and this tournament holds a special place in the international golf scene. It is only natural for Coca-Cola and Barclays Kenya Open to complement each other.”

KOGL has managed to reach the target it set to meet the prize money of € 200,000 up from € 190,000 last year, none of which would have been achieved without the support received from corporate sponsors like yourselves”.

Speaking at the same function, Njonjo said, “By putting our entire portfolio behind this year’s Tournament, we underscore our continued commitment to supporting golf both here in Kenya and internationally”.