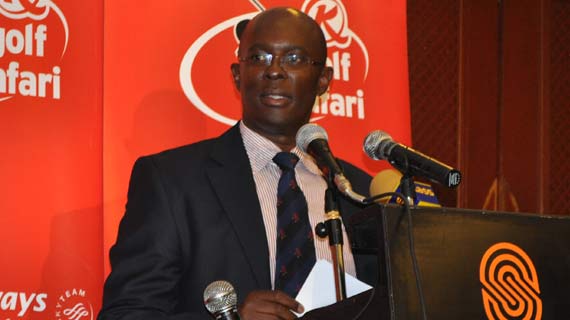 Kenya golf Union chairman Mwaniki Gachoka on Tuesday revealed that the Golf union is focusing on presenting a golf team that will represent Kenya at the Olympics come 2016. The chairman who was speaking during a press briefing on Tuesday said it is a high time that Kenya receives global recognition for its Golf talent.

Golf was last featured in the summer Olympics games official programme in 1900 and 1904 but the International Olympic body  in 2009 decided to reinstate this event for the 2016 summer Olympics . The event will feature professional golfers, many of whom have expressed interest in having golf brought back as an Olympic sport.

As per the agreement reached between the union  and the major sponsors Kenya Airways in the beginning of the KQ golf series 2011/2012 , the officials set aside KSH.500, 000 of the total 15 million shillings received for development purposes.

The half a million shillings package was  donated to the Kenya golf foundation with an aim of implementing initiatives that would help in promoting golf among the underprivileged youth in the country as well as foresee the growth of junior leagues.

“In order to develop golf in the country, the players need to show intensive commitment and discipline. This should then be topped up with good leadership so as to bring up a generation that can compete in international tournaments and perform well just like we do in other sports such as Athletics,” stressed Gachoka.

Currently the junior league is already ongoing but it’s highly active during the school holidays. He further added that each registered golf club has a junior golfers program running.

Charan Thethy the chairman of professional golfers of Kenya (PGK) also echoed the need of strong junior leagues that will help in nurturing untapped golf talent which can later be promoted to the professional or amateur bodies .This he said will enhance stable continuity.

“Both the adult and junior golf programs are really important for the growth of the sport in the country. There will be no point to have an adult program without the junior one, this will only mean that we cannot tap new and upcoming talent. At the same time, the junior players need clubs in which they can graduate to when they mature in both age and skill,” said Thethy.

With all the development plans running as planned, the union is confident of forming a team that could represent the country in the Olympics come 2016.