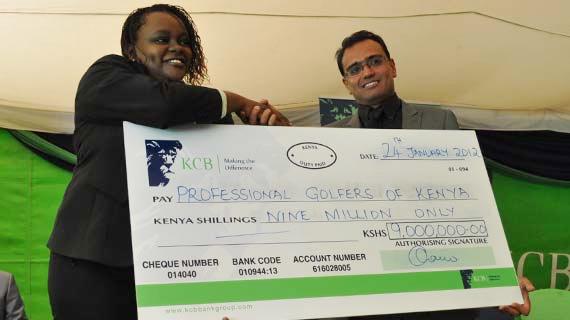 Muthaiga Golf Club will play host to golfers from the region in this year’s second leg of The KCB East Africa Golf tour scheduled for 29th February to 3rd March, 2012.

The Muthaiga tournament follows the successful premier of the tour at the Thika Golf Club where Royal Nairobi Golf Club professional Anil Shah produced an impressive five under par 67 in the closing round of the KCB Advantage Banking Challenge, to walk away with the top prize.

According to the Professional Golfers of Kenya (PGK) Captain Rizwan Charania, the Muthaiga tournament is a four round event unlike the Thika Golf Club tour which had three rounds.

The tournament, which is open to all professional golfers from Kenya, Uganda, Tanzania and Ethiopia, and has already, attracted a field of 36 professionals including Haille Ghedreegziabher from Ethiopia.

Kenyan Pro Dismas Indiza, who has been away in South Africa for the past two weeks taking part in the recently concluded Telkom PGA tournament that’s part of the South Africa Sunshine Tour, has also confirmed participation.

The six amateurs who have been drawn to play in the Kenya Open will also take part in KCB Golf tour in Muthaiga as part of their preparations.

The professional golfers will tee off on Wednesday at 8.30 a.m. and continue playing on Thursday. A Pro- Am will take place on Friday with a field of 120 amateurs drawn from KCB corporate guests. The final round will be on Saturday where Muthaiga club members will get a chance to play with the professionals.

The bank has committed a total of KShs 9 million, of which KShs 6.4 million will be prize fund for the professionals while the golf administration and prizes for the amateurs amount to KShs 2,600,000.