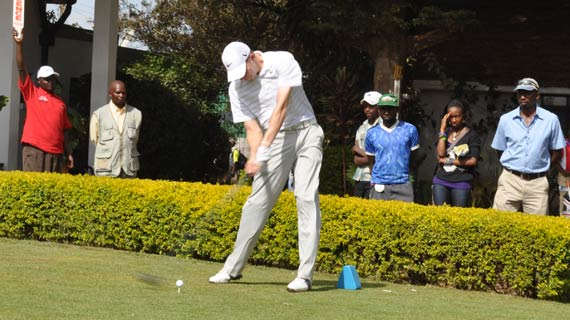 The fourth round for the KCB East African Golf Tour tees off at the magnificent par 71 Royal Nairobi Golf Club this Wednesday.According to the Chairman of Professional Golfers of Kenya (PGK), Rizwan Charania, this leg has registered over 30 professionals attesting to growth and popularity of the game.

“The number of Pros has increased effectively giving big numbers to the various tournaments that are staged across the country,” Charania said.

The growth is attributed to the increase in individual tournament prize money in this year’s series.

KCB is the sole sponsor of the KCB East Africa Golf Tour tournament that has enabled the development of young talents in view of the popularity currently taking place in the game.

KCB will host Professionals to a three day tournament and the fourth day a PRO-AM where amateurs are grouped with Pros will play. According to PGK Chairman, who is also the Resident Pro at Windsor Golf Club, this has contributed to growth.

KCB Advantage Banking Golf tournament series has witnessed a variety of winners; during this year’s inaugural tournament held at Thika golf club Anil Shah of Royal Nairobi Golf club emerged the overall winner bagging a five under par 67 in the final day; in the second leg Rizwan Charania of Windsor Golf club emerged the overall winner with a 71, 65 and 69 to close with an overall 8 under par.

A tough tournament is expected as the grass meets the iron in this encounter that marks a significant turn towards the KCB East African Golf tour grand finale.KCB bank has committed a total of KShs 9 million, of which KShs 6.4 million continues to be spent on cash rewards for the professionals while the golf administration and other prizes for the amateurs amount to KShs 2.6 million