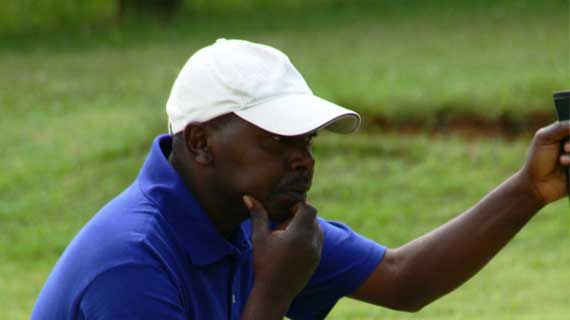 The second round of the 2012 Dasani Golf Gala saw teams turn out in large numbers  and better scores posted as action took place at the par 72 Thika Sports Club on Saturday 2 June 2012.

Edwin Kiarie, a handicap four player, posted the best score of the competition thus far, his 40 points coming off identical 20 points on the front and back nines, an effort that saw his team emerge second overall with 109 points.

John Komo, handicap 5, aided his team’s cause with  a score of 35 after posting rounds of 19 and 16 on the front and back nines while while handicap 13 Njuguna Kahoya had 34 points (15, 19). Jimmy Mbugua playing off handicap 23 was the team’s weakest link, posting a combined 28 points (14, 14) and the general feeling was that had he upped his game, his team would have probably emerged top of the pile. His score meant that his team, and not Simon Mukiri’s team, would energe as one of the two qualifiers from Thika.  Mukiri’s team was relegated to a reserve team despite the fact that they had scored a similar total of 109 points.

The event was graced by Nairobi Bottlers Finance Manager Cyrus Gitau who presided over the prize giving ceremony.

The top two teams at the Thika leg of the Dasani Golf Gala earned an automatic qualifier to the Grand Finale scheduled for the Karen Golf and Country Club on Saturday 29 September 2012.

The Gala , which teed off in Kiambu last weekend now heads to Vet Lab on Saturday 9 June 2012.  The team emerging tops at the Grand Finale will win the grand prize, a tour to Dubai to attend the Grand Finale of the European Tour, the DP World Tour Championships at the Jumeirah Golf Estates. While in Dubai. They will also have the opportunity to see Europe’s top 60 money earners on the 2012 Order of Merit battle it out for a 1.3 million winner’s cheque.

In addition, they will play at some of the best golf courses in the region, including the Dubai Creek Course and the challenging Faldo Course at the Emirates Golf Club, a course designed by former world number 1 and six-time major Champion Sir Nick Faldo.