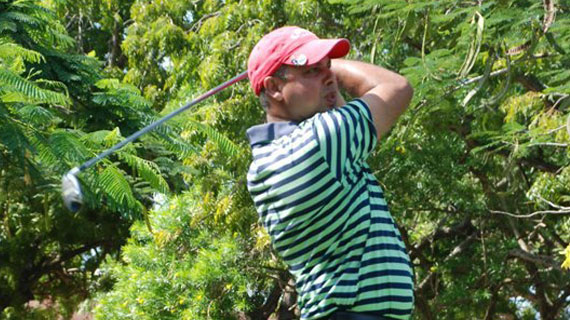 Hanvit Shah returned a massive 40 stable ford points at the Dasani Golf Gala Championship held at the Royal Nairobi Golf Club to lead his team to victory. The handicap-18 veteran golfer played steady golf on the long and challenging Royal course to anchor his team of RB Shah, Milna Shah and Kirit Patel to victory with 111 team points.

RB Shah scored 37 points, Milan added 34 points whilst Patel was the team’s weakest link with 26 points. Speaking at the prize giving ceremony, Patel lauded his team promising to play better at the Grand Finale. “My game was not great today, but luckily, the Dasani championship is a team event and my team mates pulled through for me,” Patel said. “At the Grand Finale, I will return the favour.”

Jay, a Kenya International amateur golfer was in his element, putting together a sting of pars around the par-72 layout at Royal. “Our team was well prepared for this event and I am happy I was able to play so well today,” Jay said. “The course was tough but my swing was true!” Pallan played to handicap returning 36 points whilst Vijay contributed 35 points. Bhavra, a former KGU Chairman and Club Chairman at Royal was the team’s weakest link with a commendable 32 points that was crucial in securing the third place finish.

Firm favourites who failed to shine include the club captain, Mugambi Muruithania, Ngoregamba Mwebesa who was dressed to kill on the course and the club chairman, Charles Kahura.

Among the individuals, Hardeep Sokhi finished top with 41 stable ford points beating Vitalis Ojode on count-back. Bernard Kiraithe was third with 40 points. Commending the winning individuals, Coca-Cola’s Peter Njonjo reminded them that the Dasani Golf Gala is a team event. “There are three secrets to winning at the Dasani Golf Gala; the first is to play well, the second is to choose a good team and the third and most important criteria is to stay hydrated with Dasani water throughout your round,” Njonjo commented with a light touch. “Sokhi, Ojode and Kiraithe played well, stayed hydrated but choose the wrong teams!”

A total of four teams from Royal qualified for the Dasani Golf Gala Grand Finale which will be held at the Karen Country Club on the 27th of August 2011. Winners at the Grand Finale will win a VVIP trip to the TOUR Championship, presented by Coca-Cola, at the East Lake Golf Club in Atlanta, Georgia. The Gala now moves to the Railway Golf Club.