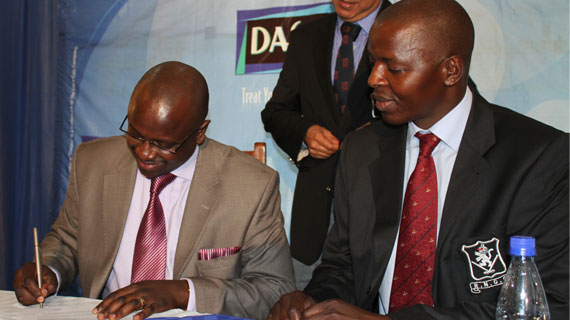 Officials during the signing of the agreement

The 2013 edition on the annual Tannahil Easter Tournament tees off this Friday at its traditional home – the Royal Nairobi Golf Club. With a new injection of sponsorship by Dasani, the organizers promise to have an even more vibrant and exciting Easter golfing treat for both players and spectators.

Royal Nairobi Golf Club Captain, Mr Jack Okuku, said “With the ever growing stature of the event coupled with unique traditions and the increased impetus from the title sponsorship by Dasani, we promise more exciting times both on and off the course. We invite all golfers and spectators to come support their respective teams as they play for the Tannahill Shield 2013”.

Coca-Cola, through the Dasani brand came on board as the title sponsors of this 90th edition of Kenya’s most coveted amateur tournament. This year’s sponsorship is to the tune of Ksh2.1 million.

At the Launch of the tournament Mr Peter Njonjo, Coca-Cola General Manager for East Africa, reiterated Dasani’s commitment towards this Royal event; “Dasani is an internationally recognized water brand, the bottled water of choice around the world. We are proud that Dasani is the water of choice for the Tannahill shield, Kenya’s most recognized amateur golf tournament,” said Njonjo.

“On behalf of Coca-Cola, I would like to wish all the participating players & teams all the very best, and for sure Dasani will be at the course to quench your thirsts for victory at the 2013 Tannahil Tournament”, he added.

The tournament was inaugurated in February 1924 traditionally known as the “Easter Tournament”. Amateur Players from selected Clubs congregate in Nairobi to play for the Silver Shield – famously referred to as the Tannahill Shield since 1938 when it was presented by Mrs.Tannahillin recognition of the contribution made to the Royal Nairobi Golf Club by her late husband – Arthur Tannahil.The Royal Nairobi golf Club has been the traditional home of the event.

Since its inception, participation is by the invitation of the Royal Nairobi Golf Club General Committee. In initial years, five clubs (Kiambu, Mombasa, Muthaiga, Nakuru and Nyeri) were invited to send teams comprising eight members. These days, nine clubs take part and the original format of foursomes match is still at play. The organizing committee has resisted many attempts over the years to convert it to a Ryder Cup style of singles, pairs and foursomes.

Taking a look at the past winners of the Tannahill Easter Tournament, in the early years Nairobi was virtually unbeatable, winning or tying in most events from 1924 to 1936.

Since the turn of the millennium, Muthaiga Golf Club has dominated the pole position – winning 8 out of the past 10 events.