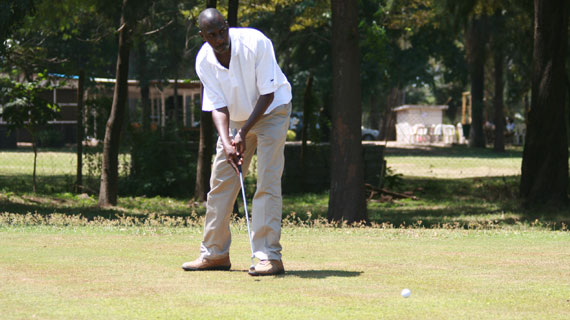 Paul Otieno became the overall winner of the Fredrick Makala Farewell Golf Day that was staged at the Nyanza Golf club at the weekend beating a field of 54 Golfers drawn from Kakamega and Kisumu.

In the second position was Ruth Kwasu who was playing off handicap 29 and also managed 40 Stableford points after posting 21 in the first nine and 19 in the second but lost on countback to Otieno.

And in Mumias on Saturday Nandi Bears Wickliffe Kamanga who was playing handicap 17 won the Eagle Africa Golf Day after posting 71 nett points in a game that attracted over 55 golfers drawn from Nandi bears, Royal Nairobi, Kakamega, Nyanza and Mumias.

In the Runner-Up position was Beatrice Shikuku from Kakamega Club who was playing handicap 16 and also brought in 71 nett but lost on countback.

On Sunday during the Club Championship 2011 Hezron Wafula became the winner after managing 168 Gross points and he was playing handicap 10.