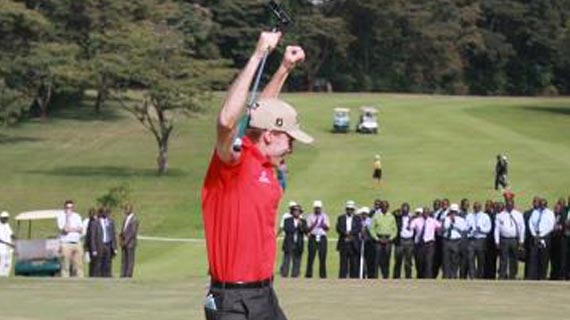 Back to the final, it was a thrilling final round from start to finish at the sun-drenched Karen Country Club in Nairobi, and despite standing on the 16th tee with a four shot lead, Garcia Pinto still had to endure a tense finish as Sluiter was afforded an eagle putt at the last to take it to a play-off.

That came after the Spaniard followed up an eagle at the 15th with back-to-back bogeys to narrow his lead back to two.


After his second shot flew the green at the par five 18th, Garcia Pinto was left with an extremely tough chip while his Dutch counter-part fired a stunning approach to leave a ten foot putt for eagle.

Garcia Pinto caught his chip heavy and left it short of the green, before his second attempt landed a just short of the hole to leave an easy par putt but, more importantly, leave Sluiter with a chance to take it to extra holes.

The man from The Netherlands, however, slid his putt to the left of the hole and could only manage a birdie, leaving his playing partner with a tap-in in for a par, a two under par round of 69 and a first Challenge Tour victory.

“I don’t know what to say,” said an emotional Garcia Pinto, who turned 23 on the opening day of the tournament. “I cannot believe it, I am in tears. The whole week was just incredible. I played a really high level of golf and my short game was incredible.

“Even when I was playing well I couldn’t relax because Tim was playing so well. It was really tight most of the way around but I just enjoyed playing with my friend. I would have been happy whoever won but I'm obviously a little happier it was me!”

The Girona man, who recently sat his final exam of a law degree, made the decision last November to relinquish the opportunity of gaining a European Tour card through Qualifying School - instead opting to play out a full season on the Challenge Tour - and he was delighted to reap the benefits of that decision so early in the 2013 season.

Sluiter, meanwhile, was disappointed to come so close after a one under par final round 70 but - in keeping with the impeccable, sporting spirit which the two players showed all weekend - was quick to congratulate Garcia Pinto.

“It was such a great experience to be honest”, said the 23 year old. “Obviously I could have won thing and I was disappointed not to put more pressure on Jordi but I was hitting really great shots, especially towards the end.

“Jordi played great and I’m happy for him. His short game was unbelievable - he’s a real Spaniard. The crowd, the Kenyan president coming around for the last six holes and enjoying it with Jordi - it was all just incredible.”

Scotland’s George Murray finished in third place on nine under par after a final round of 69, while former European Tour winner José-Filipe Lima equalled the course record of 65 to climb to fourth position on eight under.