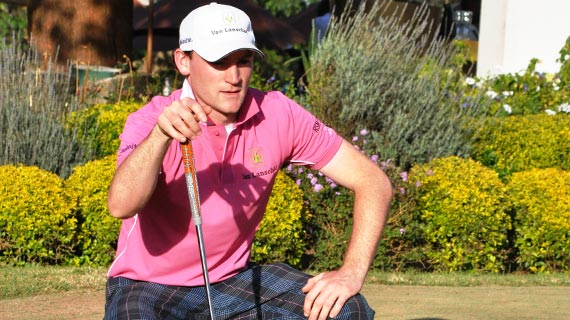 Greg Snow led a contingent of five Kenyans in making the cut at The Barclays Kenya Open currently taking place at the Karen Country Club outside Nairobi. Snow shot a second round 71, his overall score of 139, putting him three under par and joint thirteenth.

David Odhiambo also made the cut, his Friday score of 69 an improvement from Thursday's 71, placing him seventeenth overall with a two under par 140.  Kopan Timbe also made it through with a one over par 143, having shot 72 on Thursday, following this up with a 71 on Friday. Brian Njoroge and Njuguna Ngugi also made the cut.

Tim Sluiter roared into the lead after day two of the Barclays Kenya Open as a course-record six under par 65 moved him a shot clear of the pack at Karen Country Club.

The 23 year old from The Netherlands was in imperious form at the sun-kissed venue outside Nairobi as he carded six birdies and an eagle to move to the top on eight under par, ahead of Spain’s Jordi Garcia Pinto and George Murray of Scotland in tied second.

Having begun the day three shots off the lead, Sluiter got off to the perfect start as he converted a three foot birdie putt at the tenth, his first, before holing another putt of similar length at the 12th to move to two under.

Another birdie at the 17th was followed by an eagle at the par five 18th, chipping in from just behind the green to reach the turn in five under.

While his back nine was less spectacular, carding bogeys at the third and sixth holes, birdies at the front nine’s two par threes - the fifth and seventh - cancelled those blemishes out before another gained shot at the ninth took him to the summit heading into the weekend's play.

“Obviously I’m delighted because it’s a tough course so to shoot six under is really good,” said Sluiter, who was twice successful in gaining a European Tour card via Qualifying School - in 2010 and 2011.

“I enjoy the course a lot and that helps me. Every shot off the tee is with a different club and you have to think your way around so I like that.

“I finished fifth in India so it’s been a really good start to the year. I didn’t get much practice done last week because of snow at home so I’m happy I didn’t lose my game at all.

“I really like the weather here and I’m staying with four other Dutch guys so it’s been really relaxed this week.”

Having come agonizingly close to his maiden Challenge Tour victory at the Open de Lyon last year, Sluiter is hoping that a first title is on its way in Kenya.

“I’m very determined,” he said. “It doesn’t have to be this week but if I keep playing the way I have so far it might happen.”

Pinto almost equaled Sluiter’s remarkable round but he was nevertheless happy with his five under par 66 and the Spaniard revealed he had a little inside information on the Karen course ahead of this week.

“My coach Joan Anglada played here about 25 years ago when he played on The European Tour and he said the course was perfect for me,” said Pinto, who turned 23 on the opening day of the tournament. “It’s tricky but I like it.

“I played really well today from the very start. After the early birdies at the second and third I was very relaxed and just enjoyed the day.

One shot further back from Pinto and Murray was another Scotsman, Raymond Russell, who added a two under par 69 to his opening 67 to enter the weekend in fourth place.