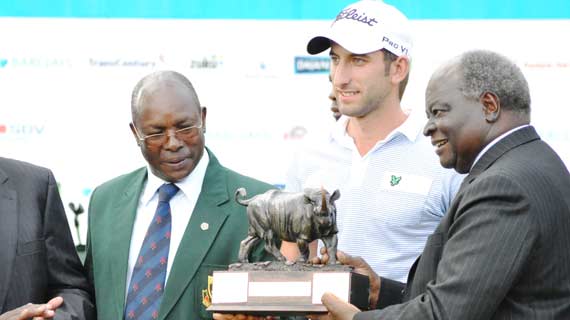 England’s Benson Seve is the new  winner of the 2012 Kenya open championship after a tightly contested game that ended in Seve’s favour in the fourth and final round of the competition that teed off on Thursday at the Muthaiga golf club. His Excellency Mwai Kibaki, the president of the republic of Kenya graced the occasion.

Seve was trailing behind Denmark’s Jensen Lasse all through the 4th round only to tie at 10 points in the final 18th hole. The tie led to a play off between the two. A bogey for Lasse in the play offs saw the championship title slip off while Seve scored a birdie that determined the winner.

According to Seve’s leader board, the 1st hole of the final round was rather disappointing after he managed a bogey but his form slowly improved to finish at 5 under par 65. His total score tallied 274.

Jensen on the other hand was holding the lead all along by recording a single bogey in hole 2 and three birdies in the 6th, 10th and 13th holes. The result left him tying at 10 points with Seve therefore leading to play offs.

“I am really humbled to be pronounced the winner of the Kenya Open this year. I had a good feeling that today (Sunday) I was better than in the other rounds and I am happy it came to pass,” said Seve.

As for Jensen, he seemed to have settled for the runners up position. “This is my 3rd tourney this year and it shows improvement in my skill,” he said.

Kenya’s Dismas Indiza and Brian Njoroge tied at position 21 with 2 points each. Indiza registered a 1 under par 71 (3 bogeys and 3 birdies) in the final round improving from the previous round which was 4 over par 75. Njoroge’s 4th round was rather tough where he suffered in the13th hole scoring a double bogey. In other holes he managed 2 bogeys and 2 birdies.

Benson Seve now takes home the coveted prize of 30,400 EUROS (3.3 million shillings) while the runners up takes 20,900 Euros. However, the land cruiser offered by Toyota remains in Kenya after all the contestants failed to manage an Eagle in the 13th hole which was the target placed for the big ride machine.