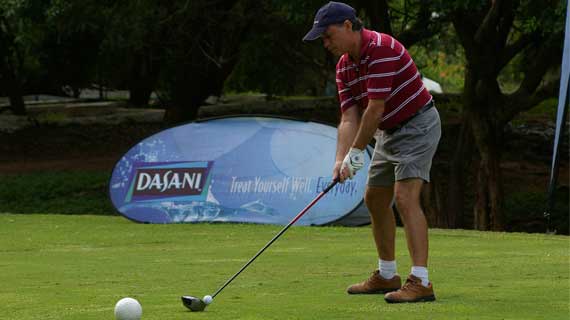 Fernando Marques at the Nyali golf club in Mombasa

By MICHEZOAFRIKA 01 Jul 2012
The ladies trio of Pia Swatton, Perviz Barnsley, Sumali Jayasinghe combined with Clive Barnsley to post a combined score of 111 points and emerge victorious at the Nyali qualifying round, played at the par 71 Nyali Golf and Country Club on Saturday 30 June 2012.

Swatton, handicap 26 and the Lady Captain at Nyali posted 39 points. Perviz Barnsley, playing off handicap 32, posted 37 points with handicap 20 Clive Barnsley, the only man on the team, posting 35 points. Jayasinghe, playing off handicap 35 was the team’s weakest link on 32 points. Swatton, P.Barnsley and Jayasinghe became the first lady qualifiers to this year’s Grand Finale taking place at the Karen Golf and Country Club on Saturday 29 September 2012.

Delivering her winners’ speech during the prize giving ceremony,  Swatton vowed to carry the same form to the finale and urged her team’s male opponents to watch out.

Booking the second and final qualifying berth from Nyali was the quartet of Lyn Nicholls, J. Oluoch, John Riley and M.Lariche who posted a combined score of  110 points.

Nicholls, playing off handicap 26 contributed 37 points to the team, while Riley,playing off 22 posted 37 points and handicap 11 Oluoch had 32 points.The team’s weakest link was M. Larice on 30 points.

Home player Diana Munyao, handicap four Daniel Nduva who was theeventual junior winner, Christine Ockotch and Jane Mburu will form Nyali’s  after they managed a team score of 108 points which was good enough for third place.

Speaking at the function, Nicholas Maina the Operations Manager Coca-Cola Coast region said the grand prize this year will see the winning team of four players travel to Dubai to attend the Grand Finale of the European Tour, the DP World Tour Championships at the Jumeirah Golf Estates. While in Dubai, they will also have the opportunity to watch  Europe’s top 60 money earners on the 2012 Order of Merit compete for the 1.3 million Euros winner’s cheque.

“In addition, they will have the opportunity  to sample some of the best golf courses in the region, including the Dubai Creek Course and the challenging Faldo Course at the Emirates Golf Club, a course designed by former world number 1 and six-time major Champion Sir Nick Faldo,” said Maina.

The Dasani Golf Gala now heads to the South Coast next weekend where eight more qualifiers will be picked from the seventh qualifier  to be held at the Leisure Lodge Golf Club Club on Saturday 7 July 2012.