Abekah and Kinuthia steer their team to victory at Vet Lab 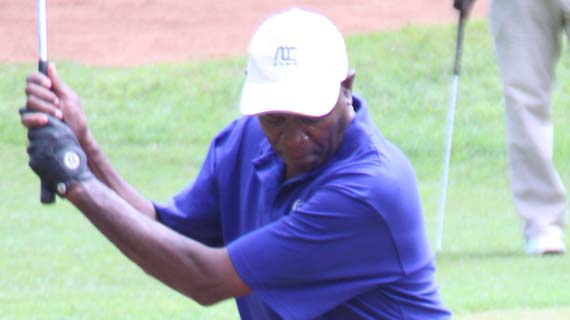 Abekah and Kinuthia steer their team to victory at Vet Lab

Identical scores of 35 points  each from Ochieng’ Abekah and the handicap twenty five Michael Kinuthia were key in steering their team to victory at the third qualifying round of the 2012 Dasani Golf Gala held at the par 71, nine hole Vet Lab Golf Club on Saturday 9 June 2012. Their teammates Sankale ole Kantai, playing off handicap fourteen and the handicap ten Martin Mukundi posted 32 points and 28 points respectively as their combined score of 102 points saw them emerge top of the pile.

Speaking about his performance, Abekah said, “I attended church as I usually do on Saturday morning, and probably this is where my blessings came from. I was the last to tee off amongst our team members, and they were at the 18th hole cheering me on. I was required to score at least 30 points but I gave them 35 points, handing my team the victory.”

He added, “I promise to lead our team to victory during the Grand Finale in September, and secure the ticket to Dubai. I will ensure that the rest of the team puts in enough practice before the finale.”

Kinuthia showed great resolve to register his 35 points, recovering from a false start in the opening nine where he registered three double bogeys for a score of 15, before recovering to post a score of  20 points in the second nine.

Third place went to  Amos Kale (34), Peter Sinkira(32), Japheth Njenga (30) and Nicholas Imbugwa (27) managed a team score of 96 points. They secured the reserve team slot, meaning that they will get to play in the Grand Finale in the event that one of the two qualifiers withdraw from the tournament.

Royal Nairobi Club’s Avnish Bhandari playing off handicap three claimed the Guest Prize after posting a score of  30 points, while Muthaiga’s handicap 27 Jay Mullick was the Junior Prize Winner after registering an impressive 34 points and while former rugby player Elisha Ogonji claimed the award for the nearest to the pin shot. Amon Kale was the men’s Longest Drive Winner while Jane Kangethe was the women’s Longest Drive Prize Winner.

The  team emerging tops at the Dasani Golf Gala’s Grand Finale in September will claim the grand prize, a tour to Dubai to attend the Grand Finale of the European Tour-the DP World Tour Championship at the Jumeirah Golf Estates.

“While in Dubai they will have the opportunity to see Europe’s best 60 money earners on the 2012 Order of Merit battle it out for a Ksh110.5 million (1.3 million dollars) winner’s cheque. In addition they will play at some of the best golf courses in the region, including the Dubai Creek Course and the Challenging Faldo Course at the Emirates Golf Club, a course designed by former world number one and six time Major Champion Sir Nick Faldo,” said Steven Maikweki, the Coca-Cola Assistant Brand Manager, Kenya, during the prize giving ceremony.

Action continues on Saturday 16 June 2012 when teams assemble at the Windsor Golf and Country Club for the fourth qualifying round.