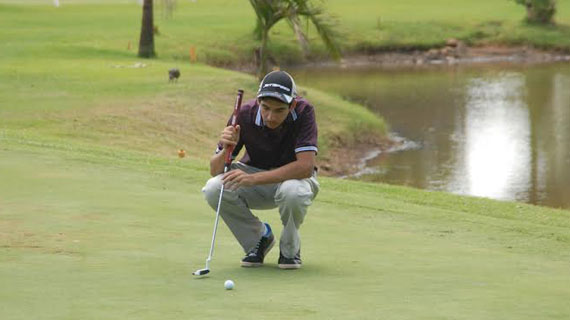 Shinkwin Callum powered his way to an impressive victory at this year’s edition of the Barclays Kenya Open 2014 Pro Am tournament, returning a score of 67 over 18 holes to emerge as the best professional.

Playing 35 in the first 9 and 32 in the second 9, Callum recorded birdies in the 4th, 7th and 18th holes while bogeying the 8th and 14th holes. However his shot of the day came in the par 3 16th hole where he sank a hole in one, earning him the 1000 Euros prize for the top placed professional.

The local onslaught was led by Hesbon Kutwa who returned a level score of 72, one better than Anil Shah.

The amateur prize was won by Chris Lloyd’s team of Teresa Mwangi and Ndungu Waweru with a cumulative score of 58, 13 under.

Speaking at the prize presentation Ceremony, Coca-Cola Marketing Manager for Kenya Ms. Mona Karingi reaffirmed her company’s commitment to the game of golf as substantiated by the recent sponsorship of Ksh. 8.6 million towards the 2014 Barclays Kenya Open. She added, in the coming four days it is our hope that you will join the Coca-Cola family in Karen Golf Club and “Open Happiness” with the repertoire of Coca-Cola beverages from Sodas, Minute Maid Juices and Dasani water.