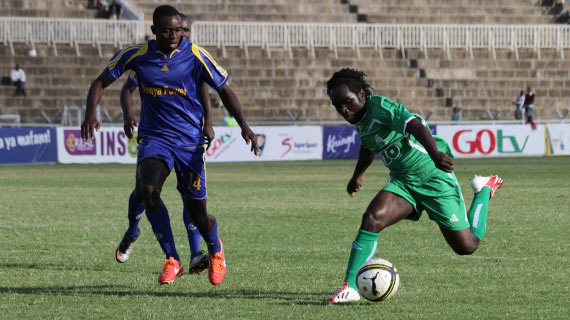 His quality has never been in doubt, but for one reason or the other, Gor Mahia’s dreadlocked striker Dan Sserunkuma began the soon to end season on a sluggish note struggling to find the back of the net.

His poor form at the time made him lose an obvious starting spot in the team when former Uganda Cranes tactician Bob Williamson took over the reins at the 12 time champions.

Back then, it  was  evident to all in sundry  that the forward who emerged as the club’s top scorer last  term  with 17 goals  under his belt  was unhappy  hence his attempt to  engineer  a move  to unnamed Armenian club.

However, Gor’s hierarchy stayed put, insisting that the player “would not be sold at any price” prompting the deal to run into a brick wall.

This kind of development brew bad blood between the player and the club’s fans who felt betrayed by a player they so much adore.

However, the player has since then undergone a major paradigm shift in attitude, returning to inspire the club as they hunt for a Cup double.

With his double goals on Saturday-in the GOtv quarter finals match against Western Stima, Sserunkuma has now scored three goals in three matches having netted via a spot kick in the 1-0 victory over against Chemelil Sugar in a league match.

Speaking after he picked his “man of the match award” on Saturday, the diminutive Ugandan forward could not hide his joy

“I am happy that I gave my best and most importantly that we are in the semi finals. Our target is to go all the way to retain the trophy” he said

It’s no doubt that with his rich vein of form, the K’Ogalo nation can’t wait to gleefully watch their prized asset tear the opposition defenses in the upcoming matches as they march on in their quest for league title and Cup double.