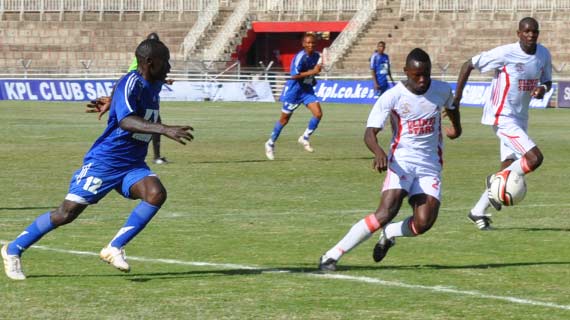 By TIMOTHY OLOBULU 04 Aug 2012
Last year’s FKF Cup finalists Sofapaka made an emphatic start to their campaign this year with a comfortable 3-0 win over army side Ulinzi Stars. Three goals in the second half ensured Batoto ba Mungu have a safe passage to the last 16 stage.

After a barren first half, Sofapaka who fielded a full strength squad began the goal hunt from the first whistle. John Njoroge opened the scores in the 49th minute when he capitalized on a defensive mix up within the soldiers backline to open the scores.

Just four minutes later, Wycliffe Ochomo had a chance to level the scores but he wasted a free header with just six yards out from a Kelvin Simiyu cross.

With Coach Sammy Simiyu fielding a shuffled line up giving the reserve players some free time, Sofapaka enjoyed superiority as they passed the ball around with ease.

Batoto ba Mungu doubled their advantage in the 75th minute through Eugene Asike who headed in John Njoroge’s corner. Just a minute later, Sofapaka heightened Ulinzi’s woes with Humphrey Mieno converting a penalty after John Baraza was hacked down in the box though the Ulinzi side contested the Isaac Ochieng’s decision.

Sofapaka now sail to the last 16 while Ulinzi would be left to store their comfort in the Top 8 and the League where they are currently ranked 4th.