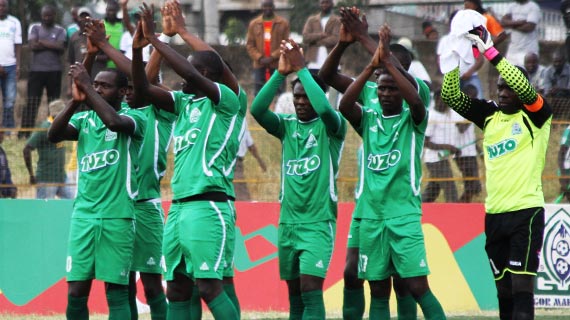 Gor  Mahia face  a tricky Thika United  challenge on Sunday afternoon at their Tok Komwwnda (City Stadium) backyard  aware that only victory should suffice against the John Kamau coached side if they are to habour  any ambition of retaining the   GO tv Domestic Cup.

As title holders, K’O galo are under pressure to win Sunday’s contest and inch their way to winning the trophy the third time in a row- after the 2011 and 2012 conquests.

Winning the second most important trophy is the only sure bet for  the  twelve time league champions to be guaranteed of continental football next year after seeing their initial eight point league lead come under severe threat , which has since been trimmed to  a paltry three points, an equivalent of a one match loss.

The Green Army already lost out on the Top 8 trophy to Tusker who   sent them packing out at the semifinals stage and their Scot head coach Bobby Williamson believes the Domestic Cup is as important at as the league Diadem.

“We will be treating it (Thika match) with the seriousness it deserves .It’s an important competition and we want to prevail” said the former Uganda tactician who is chasing a double.

Currently a top the log on 41 points , K’Ogalo will be hoping to  make the most of the visitors  to sail to the quarters .

The Kamau  coached side have been a hard nut to crack for K’Ogalo after  holding the latter  to a barren  draw in the first  leg league match, but  the Green Army  will be hoping that  on Sunday noon, the  wind will blow  in their  favour .