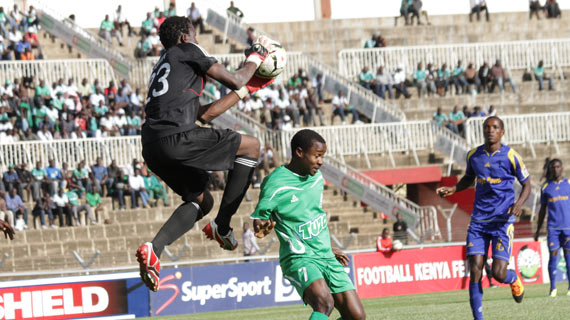 Stima vs Gor Mahia at Nyayo

Baraza who was bereaved was not available at the touchline as his place was taken by the Kenyan Premier League under 19 winning coach at the Nyayo stadium.

“At times it is not easy to play without your head coach on the touchline.” He said.

The Western boys tried to hold the reigning champions well early in the match but could not maintain the tempo with the Ugandan Danny Sserenkuma scoring a brace later in the half.

“Our strategies were to hold back and do the counter attack which did work to our advantage in the opening half hour. We were spot on defensively.” He said.

“Once they scored the first goal, they were on the attack until the end of the half. In the second period we had to attack more but keeper Ivo Mapunda denied us on a couple of occasions.”

Nyabinge said he cannot fault the players’ approach against the inform premier league leaders buoyed by the large home crowd.

“Had we not defended well maybe their score line could have been even embarrassing for my team. The players put all their challenges aside and concentrated on the match .For that I give them I big positive thumbs up.”He said.

Stima as the coach emphasized plan on finishing in the top eight slots. They play AFC Leopards on Wednesday