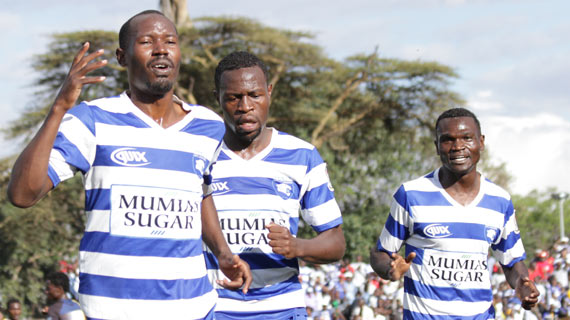 A Musa Mudde brace in the second half  was enough to fire AFC Leopards to the quarter finals of the GOTV Cup after they beat Ligi Ndogo 2-0 on Sunday at City Stadium.

The Ugandan midfielder found the target in the 55th minute from an Edwin Wafula cross and added another in the 70th minute this time making the most of a Duncan Otewa delivery.

The win is a morale boost to Ingwe who are aiming at retaining the title they won last term when they beat arch rivals Gor Mahia 1-0 in the final.

Former Gor Mahia man Joseph Wanyonyi and Bernard Mang’oli were actively involved in the action but could not find the mark.

Ligi Ndogo’s best chance came in the 44th minute when Brilliant Ochieng was played through, running into the box only to fire off target.Brilliant was later rushed to hospital in an ambulance in the second half when he was accidentally hit in the face by Jacob Keli.

There were chaotic scenes witnessed in the second haslf as the match was temporarily halted when AFC Leopards fans protested Jacob Keli's Red card  following the incident.Police officers were forced to fire live bullets in the air  to calm the angry fans who threatened to break through into the playing area.

However calm restored and the match ended peacefully with Brilliant also returning to the stadium after treatment at the nearby hospital.