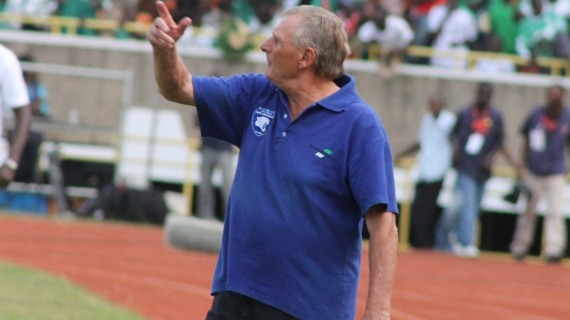 By AMOS ABUGA 05 Aug 2012
AFC Leopards coach Jans Koops says his team is capable of winning two trophies at the end of the season though he maintains that his team’s main concern at the moment is to win the KPL title.

The current league leaders on Saturday defeated former champions Mathare united 2-0 in their first match of the FKF Cup, thanks to goals from Jimmy Bagaye and Allan Wanga in the second half to advance to the round of 16.

Koops said it was a difficult match especially in the first half, when the opponents played  well and should have taken unexpected lead, from the one chance they created.

“As a team we want to take part in organized cups and tournaments. It is the objective of the club to promote Kenyan football and with a cup like this one, I am sure we will achieve such targets, and take the league to new heights.” Koops said.

“Going forward we want to win the presidents cup. We will put our best foot forward to bring in two trophies but as a club our priority is winning the league,” said the coach

The tactician defended his move to bring in a forward, Jimmy Bagaye, the scorer of the first goal for a defender Jonas Nahimana who picked up an injury in the first half.

“You need to have players who are able to play any given position in football. Our captain Martin Imbalambala covered very well for Nahimana, therefore allowing the substitute to play in an advanced role. We need more such utility players,” said the coach.

The coach says he expects his players to remain focused and do very well in the upcoming league matches.